Silliman sworn in as an appellate judge on the U.S. Court of Military Commission Review 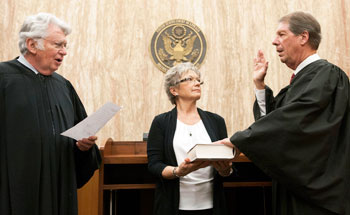 Professor Scott Silliman has been sworn in as an appellate judge on the United States Court of Military Commission Review.

Silliman, director emeritus of the Duke Center on Law, Ethics and National Security, was sworn in by Chief Judge David B. Sentelle of the Court of Appeals for the District of Columbia Circuit on Sept. 12.

President Barack Obama nominated Silliman to the Court of Military Commission Review on Nov. 10, 2011 as one of two civilian judges, positions authorized by the Military Commissions Act of 2009; the court was earlier comprised solely of military appellate judges.  The president formally appointed Silliman and New York attorney William Pollard as judges on Aug. 30, following their confirmation by the United States Senate.

“Having spent 25 years as an Air Force uniformed attorney prior to joining the Duke Law faculty in 1993, I consider it both an honor and a privilege to have been appointed to the court by the president and to be allowed to serve my country once again,” said Silliman.  “With regard to those cases prosecuted by military commission at Guantánamo Bay, the United States Court of Military Commission Review is charged by statute with affirming only such findings of guilt, and the sentence or such part of the sentence, as it finds correct in law and fact and determines, on the basis of the whole record of trial, should be approved.  I look forward to joining my fellow judges on the Court in faithfully and impartially fulfilling that charge.”

Silliman joined the Duke Law faculty after a 25-year career as an Air Force judge advocate during which he held a variety of leadership positions, including staff judge advocate and senior attorney for Tactical Air Command and later Air Combat Command. During the Persian Gulf War, he supervised the deployment of all Air Force attorneys and paralegals incident to Operations Desert Shield/Desert Storm. He retired from the Air Force with the rank of colonel.

Sara Sun Beale, the Charles L.B. Lowndes Professor of Law, and Christopher Schroeder, the Charles S. Murphy Professor of Law and Public Policy Studies, also attended the swearing-in ceremony.  Schroeder, who is on leave from Duke while serving as assistant attorney general for the Office of Legal Policy in the Department of Justice, assists the president and attorney general in the selection and confirmation of federal judges.  Peter Kahn ’76, a partner at Williams & Connolly in Washington and a former chair of the Board of Visitors also attended, as did one of Silliman’s former students, Julian Yap ’07, now senior counsel in the Office of Legal Policy at the DOJ.