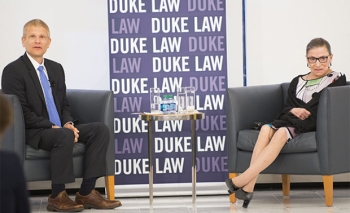 Ginsburg spoke before a capacity audience of 208 people at the offices of Jones Day, after which she was interviewed by Neil Siegel, the David W. Ichel Professor of Law and Professor of Political Science and director of the D.C. Summer Institute. The event, co-sponsored by the DukeDC alumni association, marked the justice’s fourth consecutive address to D.C. Summer Institute students.

Ginsburg opened her remarks with a remembrance of Scalia, who died on Feb. 13.The two jurists sat on the high court together for almost 23 years, after earlier serving as colleagues on the U.S. Court of Appeals for the D.C. Circuit, and were close friends despite holding opposing ideologies.

“His death was, by far, the most momentous occurrence of the term,” she said. “His absence will be felt for many terms to follow.”

Read More: Duke Law scholars reflect on the legacy of Justice Antonin Scalia and on the confirmation process ahead

Because of Scalia’s death, the Court emerged equally divided in four cases. Noting that three of them were among the most-watched cases of the term, Ginsburg traced the paths they took to the high court, reviewing the legal arguments and the decisions made by lower courts along the way.

Among the cases she highlighted were U.S. v. Texas, the state’s challenge to President Barack Obama’s executive order on immigration, Friedrichs v. California Teachers Association, which centered on whether or not requiring public sector employees to pay any union fees violates free speech guarantees, and Dollar General Corporation v. Mississippi Band of Choctaw Indians, which focused on whether a tribal court can hear civil claims filed by members of the tribe against non-members who engage in wrongful conduct on an American Indian reservation.

Because the Supreme Court was equally divided, the lower court rulings in each case stands, Ginsburg explained, although the high court’s decisions are non-precedential.

In a wide-ranging conversation with Siegel, one of her former clerks, Ginsburg observed that Scalia’s loss also impacted cases that didn’t end in ties, such as the affirmative-action case Fisher v. University of Texas.

Because Justice Elena Kagan was recused from Fisher, it would almost definitely have ended in a tie had Scalia been on the bench, Ginsburg said. That tie would have affirmed the lower court ruling upholding affirmative action without setting a precedent. In Scalia’s absence the Court still upheld the lower court’s ruling, but Justice Anthony Kennedy was able to write a majority opinion outlining the Court’s reasoning, thus settling the matter more definitively, Ginsburg said.

"This decision goes back to Justice Powell’s view of affirmative action — permissible if it is only one factor among many — so I think that most university presidents must have breathed a great sigh of relief," Ginsburg said. "It’s not a guessing game anymore.”

Ginsburg mentioned one more notable statistic from the term: Justice Clarence Thomas, “after a 10 year silence, astonished all in attendance by asking nine questions, all in the same case.”

In a wide-ranging conversation, Siegel asked Ginsburg about Zubik v. Burwell, a consolidated case challenging the Affordable Care Act’s contraceptive coverage on religious grounds. The Court handled that case in an unusual manner, first seeking supplemental briefings on a potential compromise immediately after oral argument, then issuing an opinion remanding the various involved cases back to their respective appellate courts with orders to allow the parties time to resolve their issues.

“It is a question many scholars have been wondering about, which is whether it is really the Court’s role to suggest to parties that they settle before the case comes to the Supreme Court,” Siegel said.

“In general, I agree with you,” Ginsburg said. “I think in this particular case, what would have been better? No decision at all, a 4-4 split, or a return to the court of appeals to consider whether the parties had narrowed their differences? Agreement among the parties is always something to cheer. So we shall see what ultimately happens, whether both sides concede something and come up with a solution both can live with.”

In celebrating Justice Scalia’s legacy, Ginsburg talked of his impact on her majority opinion in United States v. Virginia.

In June of 1996, as she was preparing to fly to a judicial conference, Scalia dropped a sheaf of papers on her desk, she said. “‘He said, ‘Ruth, this is the penultimate draft of my dissent in the Virginia Military Institute case,’” she recalled. Scalia was drafting the sole dissent to the Court’s decision to strike down the school’s male-only admission policy.

“As he put the papers on my desk, Justice Scalia said, ‘This is the penultimate draft, it’s not yet in shape to circulate to the court, but the clock is running out and I want to give you as much time as I can to answer it,’” she said. “I read the dissent on the plane to Albany. It was a zinger. It took me to task on things large and small.”

Scalia’s dissent, and his willingness to share it, Ginsburg said, made the Court’s decision stronger.

“Thinking about fittingly restrained responses consumed my weekend, but I was glad to have the extra days to adjust the court’s opinion. My final draft was more persuasive thanks to Justice Scalia’s searing criticism. Indeed, whenever I wrote for the court and received a Scalia dissent, the majority opinion ultimately released was clearer and more convincing than my initial circulation.”

When asked about advice she might have for young lawyers and law students, Ginsburg advised finding ways to “work for something outside yourself.”

“I think of all the years when I was heading the ACLU Women’s Rights Project. I wasn’t getting paid for it, but I got much more satisfaction out of doing that than the jobs I was paid for.” The justice co-founded the Women’s Rights Project in in 1972 and helped lead it to a number of significant Supreme Court victories before she became an appellate judge in 1980.