On Sept. 30, 2011, a U.S. drone strike in Yemen killed Anwar al-Awlaki, a senior leader of al-Qaeda in the Arabian peninsula, and a U.S. citizen. The strike was carefully planned and vetted, with executive branch lawyers finding constitutional justification for killing a U.S. citizen without a trial.

In his new book, Targeting Americans: The Constitutionality of the U.S. Drone War, professor H. Jefferson Powell provides a dispassionate and balanced analysis of the issues posed by U.S. targeted killing policy. A prolific scholar whose work has addressed the history and ethical implications of American constitutionalism, the powers of the executive branch, and the role of the Constitution in legislative and judicial decision-making, Powell also has served in a variety of positions in federal and state government, most recently as deputy assistant attorney general in the U.S. Department of Justice’s Office of Legal Counsel, which provides legal advice to the president, the attorney general, and other executive branch officers.

Powell cautions that constitutional questions do not address all issues relevant to the targeted killing policy: they do not resolve whether the policy in question conforms with international law or all forms of domestic law; whether it is moral or just; or whether it is in the nation’s best interests. But all actions of the federal government must be constitutional, and the framework in which these issues are debated is critical, he writes. While he agreed with the Obama administration lawyers who declared al-Awlaki’s killing lawful, he found their analysis flawed. In the following excerpt, powell explains why that matters. 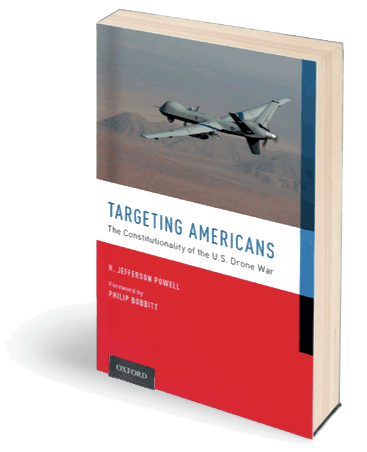 It is ... vitally important that we try to get our constitutional thinking right, as opposed to simply arriving at the outcome we think best on some other ground and then contriving a constitutional argument to fit our conclusion. there are at least three reasons why this is so.

The first has to do with the role of law in American society and government. ... The options policymakers consider and those they reject out of hand, the extralegal factors they take into consideration, their final decisions on controversial topics, all reflect the law, or rather what people understand about the law. This can be true at very deep levels when the law in question is the law of the U.S. Constitution.

A deep concern about the law can serve the political community well in many ways, above all when legislators and executive officers have absorbed the civilizing aspects of the law into their thinking about matters of policy and discretion. But the pervasively legalistic mindset of early twenty-first-century American officials creates a standing temptation to confuse the question of constitutionality with questions of wisdom and morality. The conclusion that X is constitutional slides all too easily into the conclusion that X is a good idea and that qualms or hesitations about X are ungrounded, even though we have learned little relevant to the question whether it would be good for the U.S. government to take a particular action — target a U.S. citizen for killing for example — when we have determined that the action would be constitutional. The lawyers can play the vital role of reminding policy makers of the Republic’s enduring commitments only if their advice is disciplined by their commitment to sound constitutional thinking. Often enough, as in the case of al-Awlaki, good constitutional reasoning does lead to the conclusion that the government can take some action, but trying to get the constitutional analysis right, and not just devise a convenient imprimatur for some policy, is a check on what Justice Jackson referred to when he said [in Youngstown Sheet & Tube Co. v. Sawyer] “[t]he tendency is strong to emphasize transient results ... and lose sight of enduring consequences.”

The second reason why those who engage in debate over the constitutionality of an act like the killing of al-Awlaki ought to care about getting their constitutional thinking right is that they have a personal duty to do so, at least if they are public officials, or lawyers advising public officials or (I would add) private individuals acting in their public roles as citizens and voters. ... No matter how exigent the threat or apparently necessary the action, anyone may question, and a conscientious president must ask, what legal authority the executive possesses to take that action in the defense of the Republic.
The Constitution does not rely entirely on the good faith of the president, or the members of Congress, to be sure: It establishes an elaborate set of institutional arrangements designed to channel and check the exercise of governmental power, and it ultimately assumes that an informed citizenry will exercise its powers to censure and to punish politically wayward governmental actions. But the Constitution presupposes as well that governmental officials can and should act out of a good faith intention to act in accordance with its norms. Constitutionality is a prerequisite of legitimacy in the American political system; disingenuous constitutional reasoning by those charged with making decisions undermines the legitimacy of those decisions and to that extent of the system itself. ...

The governmental system created by the Constitution constantly depends, in fact, on the intelligent and conscientious execution of their duties by those who hold public office and, in the end, those who enjoy the privileges of citizenship. The cynical belief that the Republic can dispense with a starting assumption of good faith is as unrealistic and unworkable as any Pollyannaish call for unguarded trust in the exercise of power. And the form in which those who discuss the Constitution exercise good faith toward the Republic is by making their best efforts to answer constitutional questions with sound constitutional reasoning. Anything else — whether the individual serves the Republic as legislator, executive officer, advisor, judge, litigator, or private citizen — is a cheat.

If it is unwise to engage in targeted killing because its net effect is to harm the security of the United States, as many think the current policy to be, then its lawfulness does not make it wise. If the president, or the American public, cannot honestly distinguish current policy from the sort of assassination that most of us would think immoral, then the U.S. government should renounce it, regardless of what the lawyers say. If it is wrong in certain circumstances to kill an al-Qaeda member who is a U.S. citizen, it is equally wrong (I think) to kill one who is not, whatever the limits of the Constitution’s prohibitions. If U.S. drone strikes are imposing a reign of terror on people in some other part of the world, then we must stop because we are contradicting the deepest moral commitments of our political community. War is an ugly and brutal business, even war fought for a just cause and with the most scrupulous attention to legal norms. The limits on war that ultimately matter are those rooted in the humanity and decency of the society that goes to war to defend itself.