Ronnie Long was imprisoned for 44 years following a 1976 rape trial tainted by police misconduct and the suppression of exculpatory evidence. On Thursday, Aug. 27, he became a free man, marking the Wrongful Convictions Clinic's ninth exoneration. 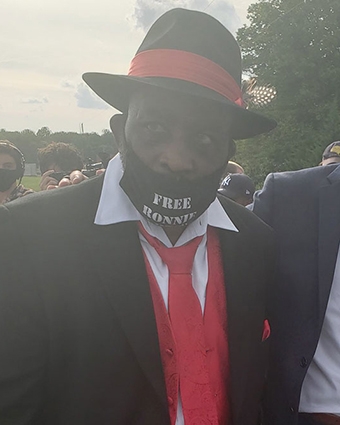 Ronnie Long, a client of Duke Law School’s Wrongful Convictions Clinic, was released from prison on Thursday, Aug. 27, after spending 44 years in North Carolina prisons for a rape conviction that was not supported by evidence from the crime scene and had proceeded in part due to the suppression of evidence that could have exonerated him.

"Elated. Elated. It's been a long road but it's over with now," Long told reporters outside Albemarle Correctional Institution. "Every minute I've got left in my life, I'm going to try to enjoy it."

Long credited his family, supporters, and his faith with keeping him going through the years. "I couldn't give up because if I give up I give out. And if I give out, it's over with.

"You keep that hope because I felt like one day [God] is going to send me somebody that's going to make it happen. And that's him," he said, gesturing toward his lead attorney, Clinical Professor Jamie Lau ’09.

In an appearance on CBS This Morning on Monday, Aug. 31, Lau gave Long the news that the Cabarrus County district attorney had formally dropped all charges against him. Lau also said he would request a pardon of innocence from Gov. Roy Cooper so Long can pursue compensation from a dedicated state fund.

While Long's incarceration was lengthy, the process to release him moved quickly. On Wednesday, Aug. 26, the State of North Carolina filed a motion with the U.S. Court of Appeals for the Fourth Circuit to initiate a process leading to Long’s freedom. The state asked the court to immediately issue a mandate in Long’s case and said it planned to move immediately in the district court for the entry of a writ vacating Long’s conviction, Lau announced on Twitter Wednesday morning.

“While it will take some time for the courts to do what is needed to vacate the conviction, the State has set in motion a process that will lead to Ronnie’s freedom,” he tweeted. “In short, Ronnie Long is coming home!” Lau added that Long, now 64, was “grateful, overwhelmed, and looks forward to reuniting with his loved ones.”

By Thursday afternoon Long was a free man, walking out of prison and into the arms of his wife Ashleigh Long.

The case had garnered national media attention and his story was featured on CBS This Morning in July. Long, who is Black, was convicted by an all-white jury on Oct. 1, 1976, for the rape of a white woman in Concord, N.C. No physical evidence tied Long to the rape and burglary, and the prosecution’s main piece of evidence — the victim’s identification of Long weeks after the attack — did not match her original description of the assailant as a “yellow or really light-skinned Black male.”

Numerous pieces of forensic evidence that could have helped exonerate Long, including 43 fingerprints that did not match his that police had collected from the crime scene, were tested by the State Bureau of Investigation but not disclosed, and officers with the Concord Police Department gave false testimony about the evidence at trial. In addition, a rape kit conducted by a hospital has never been found.

Wednesday’s motion by the state closely followed the release of a strongly-worded opinion issued Aug. 24 by the Fourth Circuit, which ruled 9-6 that Long’s due process rights were violated at his 1976 trial and remanded the case to the district court to decide the question of innocence. That opinion was issued after a rare en banc hearing in May during which the state conceded that evidence was withheld from Long at trial and that officers testified about the evidence in a misleading manner. Due to the COVID-19 pandemic, Lau argued the case on behalf of Mr. Long virtually from the Wrongful Convictions Clinic conference room at Duke Law.

In the opinion, Fourth Circuit Judge Stephanie Thacker called misconduct by the Concord Police Department so “extreme and continuous” that Long could not have discovered the withheld evidence to support his own defense. The opinion also noted the case was tried before an all-white jury in the racially polarized atmosphere of 1970s small-town North Carolina.

Added Judge James Wynn: “Mr. Long thus faced a steep uphill battle to persuade the jury of his innocence before he ever set foot in the courtroom. And that uphill climb became an impossibly steep — perhaps even vertical — one when one considers the particular crime in this case: an interracial rape.”

Wynn concluded his concurring opinion, “Forty-four years is an unconscionably long period to wait for justice. It is time.”

Celebration for freedom — and sorrow for time lost

Wednesday’s development followed increasing pressure from legislators, faith leaders, and nearly 40,000 people who marched, petitioned, and sent letters calling on Cooper to commute Long’s sentence, especially in light of the COVID-19 pandemic. Prisons throughout the country have become hotspots for the virus. At Albemarle Correctional Institution, where Long has been sleeping in a 32-bed open dormitory, more than 150 inmates — almost a third of the population — have tested positive for COVID-19. Three inmates have died. Cooper has not addressed the case publicly.

Following Lau’s announcement on social media that Long would soon be released, Long’s supporters exulted in his impending freedom.

“Thank God!!!!!” posted former Wrongful Convictions Client Dontae Sharpe, who was freed from prison on Aug. 22, 2019, after being incarcerated for 25 years on a 1994 murder conviction. Sharpe had been represented since 2010 by Charles S. Rhyne Clinical Professor of Law Theresa Newman ’88, who also served on Long’s legal team.

Some supporters struck a somber tone, noting that Long has spent more than two-thirds of his life behind bars and that his parents did not live to see their son exonerated. Long’s mother, who never lost faith in his innocence, died less than two months ago, and his father died a decade ago.

“This is incredible news, especially during this time of turmoil and racial injustice,” Wade wrote in an email. “It has been such a privilege to work on Ronnie’s case and I only regret that his mom couldn’t live to see her son come home.”

“I am absolutely beside myself. Thank goodness!!!!!” Wittstein wrote.

Along with Lau and Newman, Duke Law faculty involved in the case include John S. Bradway Professor James E. Coleman, Jr., who with Newman co-directs the Wrongful Convictions Clinic, and L. Neil Williams, Jr., Professor Brandon Garrett, who filed an amicus brief in the case before the Fourth Circuit Court of Appeals.

"I always believed that one day I'd be standing where I'm standing right now, and I never gave up hope."

Read more on the case: