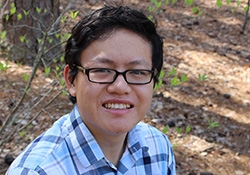 When Clinical Professor Jane Wettach assigned Kevin Zhao ’18 the task of drafting an amicus brief in a case challenging inequality in Halifax County, N.C., schools as a project for the Children’s Law Clinic, she knew he would bring more than solid academic skills to the endeavor. Prior to entering law school at Duke, he had taught fifth grade in the county for three years as a Teach for America corps member.

“In fact,” said Wettach, who directs the clinic, “his paper for my Education Law class was titled ‘Halifax County, North Carolina: Allowing separate to remain unequal?’”

Zhao’s brief, filed with the North Carolina Supreme Court in conjunction with Advocates for Children’s Services of Legal Aid of N.C. and Public Schools First, supports a coalition of parents and community groups that sued the Halifax County Board of Commissioners in 2016, alleging that the county’s operation of three distinct and variably resourced school districts violates North Carolina’s constitution.

While the N.C. Court of Appeals had dismissed the lawsuit against the Halifax County commissioners on the grounds that the obligation to provide children with “a sound basic education,” as clarified by the long-running Leandro cases, rested only with the state, Zhao cited precedents that found local entities similarly liable for depriving students of their educational rights. In one, a student who was given a long-term suspension but provided with no alternative educational placement, sued a county board of education in a claim that was upheld by every level of the North Carolina courts. In another state lawsuit, students successfully sued another local education board for instituting an “instructional fee” structure that essentially left poor public students without equal access to education.

Zhao argued, in the brief, that Halifax County’s liability for unconstitutionally failing to provide a sound education rests in the board of commissioners’ ability to “create and distribute local taxes, purchase school buses, and approve district budgets.” Citing the original complaint, he argued that the board failed to allocate sufficient resources to two of the county’s three school districts, as evidenced by hallways frequently flooded with sewage, ceilings that crumble onto desks, mold infestations, frequent bus breakdowns that cause many students to miss significant portions of the school day, and forced sharing of outdated and worn down textbooks, among other problems.

He had witnessed a lack of basic resources in two of Halifax County’s three districts firsthand while teaching at a charter school focused on getting students in under-resourced areas into college. As a result, the wait list for his school was in the triple digits, Zhao said. “It was longer than our graduating class. Students were chosen for the school through a lottery system -- the sheriff would literally pick names out of a hat. You actually saw parents cry when their child’s name wasn’t picked. It was heartbreaking, and startling to see how it was completely up to chance what a kids’ future was going to be.”

During that time, he lived in Roanoke Rapids, home to the best-resourced — and whitest — of the three districts. “The school district lines were drawn so that I lived in a pretty nice, gentrified neighborhood which was in the ‘good’ school district,” he said. “But there was a mobile home park just across the street, and the district line cut them out of that school district even though they were part of Roanoke Rapids.” The differences in resource apportionment was visible, he added. “I lived right next to a Roanoke Rapids school that looks like a castle with turrets. Then I would go to my school, which was fairly nice and clean and had no structural problems. But then I would talk to my students who came from other places in the county, and their stories were horrifying.”

Wettach, who has had longstanding involvement with Leandro cases, called Halifax County’s three school districts a vestige of segregation.

“In the 1960s and 70s there was a movement to merge segregated school districts,” she said. “Raleigh and Wake County pulled together, Durham County and City came together. Halifax County retained its three districts, which are each racially identifiable, as well as its pattern of underfunding the two districts that are predominantly African-American.”

Wettach and Zhao plan to attend oral arguments in Silver v. Halifax County Board of Commissioners, which are scheduled for April 16.

Zhao said that Wettach’s Education Law class informed his brief, as did the legal writing practice he received through the Law School’s Legal Writing program and in a 1L summer internship in the chambers of Chief Judge Frank Whitney of the U.S. District Court for the Western District of North Carolina. Zhao will clerk with Judge Whitney after graduating, after which he will join Winston & Strawn in Charlotte, his hometown.

As a North Carolina native with a number of teachers in his family, Zhao said his Children’s Law Clinic work was particularly gratifying: “The chance to work on this brief seemed like another way to give back, and to contribute specifically to the educational system.”