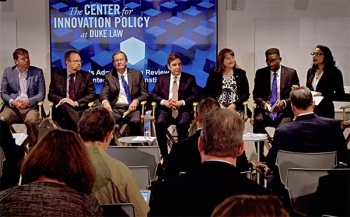 Arti Rai, far right, moderated a panel on the constitutionality of the USPTO’s administrative patent review process on Sept. 22 at a Center for Innovation Policy event.

On Sept. 22, the Duke Law Center for Innovation Policy (CIP) brought representatives from government, private industry, and academia together in Washington, D.C., to consider the implications of a challenge, to be decided by the Supreme Court, to the constitutionality of an administrative patent-review process used by the U.S. Patent and Trademark Office (USPTO).

CIP faculty co-director Arti Rai, the Elvin R. Latty Professor of Law, moderated the event, which involved an in-depth examination of Oil States Energy Services v. Greene’s Energy Group, a case currently before the Court, in which the petitioner argues that the administrative process is unconstitutional because patents, once granted, can be invalidated only by a federal court. In addition to considering the impact that scrapping the USPTO’s process, which was introduced by the America Invents Act of 2011 to facilitate speed and certainty in patent review, might have on patent law and innovation, participants discussed the questions the case raises regarding the relationship between the administrative state and the judicial branch.

The panelists included James Smith ’86, the former — and first — chief judge of the USPTO’s Patent Trial and Appeal Board (PTAB), the administrative tribunal at issue in Oil States, who addressed its establishment and operation and suggested ways its process could be statutorily improved, and former U.S. Solicitor General Donald Verrilli, who discussed the impact of the case for the administrative state. Other speakers were patent litigators, scholars, and representatives of industries that depend heavily on patents to finance and incentivize ongoing innovation.

The breadth of perspectives offered showcased the CIP’s emerging role as an “honest broker” in innovation policy issues, said Mike Messinger, a co-founder of the intellectual property strategy firm Shami Messinger. Speaking after the event, Messinger said that the Oil States ruling could be “incredibly disruptive” to his clients’ markets for their patents, such as software licensing markets in which small ﬁrms frequently participate.

“My experience of the CIP has been that it is a unique forum that brings in not only skilled people on a legal issue like we’re discussing today, but also that they bring in high-level people to discuss issues from technological, economics, and business viewpoints,” he said. “It’s very difﬁcult to get analysis at the caliber the CIP is achieving.”

The conference on the constitutionality of administrative patent review, which was held at Duke University’s Washington, D.C., headquarters, was the latest in a series convened by CIP on ways to improve federal law and policy that affects intellectual property, telecommunications and the internet, and such health care industries as medical devices and pharmaceuticals. Rai said the event reﬂected the CIP’s mission in the way it examined a speciﬁc issue from multiple perspectives with the aim to understand, more broadly, what works and what doesn’t in innovation policy. “It was a topical event, but with the aim of trying to elucidate larger lessons. Even in the patent context we were trying to elucidate what thiswill mean down the line.”

Added CIP faculty co-director Stuart Benjamin, the Douglas B. Maggs Professor of Law: “There are centers and think tanks that do a lot of mile-high theorizing, and a whole lot of the action, especially in D.C., is what’s going to happen in the next legislative session, what’s right around the corner. And we’re trying to be in between those two.” 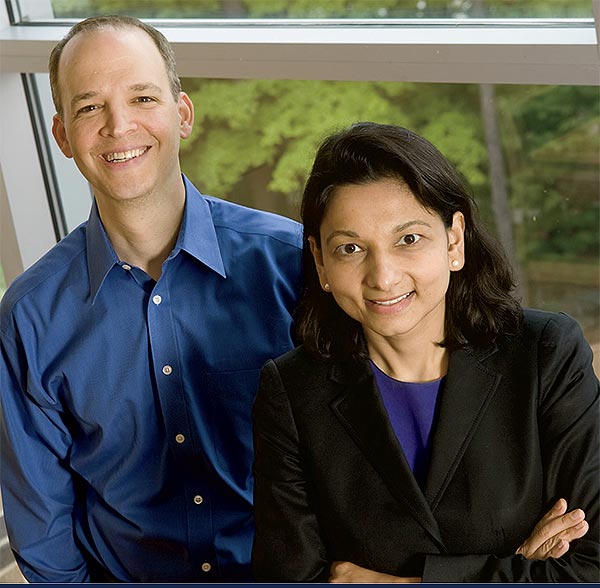 Rai and Benjamin bring an exceptional breadth of knowledge of the innovation and policymaking process to the center they established at Duke in 2013, as does Stephen Merrill, who has served as executive director since 2014. Rai, who focuses her research, scholarship, and teaching on intellectual property, administrative law, and innovation policy in biotechnology, pharmaceuticals, and software, served as administrator of the Ofﬁce of External Affairs at the USPTO from 2009 to 2010, after earlier serving on President Barack Obama’s transition team that reviewed the agency. Benjamin, who is also the Law School’s associate dean for research, specializes in telecommunications law, the First Amendment, and administrative law, and served as the ﬁrst Distinguished Scholar at the Federal Communications Commission from 2009 to 2011. Merrill’s prior work as the longtime head of the National Academies Board on Science, Technology, and Economic Policy included producing a report on patent system reform that served as a blueprint for the America Invents Act.

This collective insight into issues and challenges facing research and innovation across a swath of industries informs CIP initiatives, which often involve collaborations with Duke University business and policy faculty, as well as the Duke Innovation & Entrepreneurship Initiative, where Merrill is a senior fellow. And their combined professional networks ensure the participation of leading ﬁgures in industry and policymaking in CIP inquiries and a receptive, bipartisan audience for its research ﬁndings. Web pioneers Tim Berners-Lee and Vint Cerf spoke at a 2014 event on internet regulations, and Sen. Chris Coons, D-Del., was the keynote speak-er at a CIP conference on the decline in corporate research funding and offered opening remarks last June at a CIP brieﬁng for congressional staff on the matter.

Merrill, who is based primarily in the nation’s capital, said it’s critical that CIP be an objective and independent forum for innovation policy discussion and research. “Other think tanks increasingly reﬂect the polarization of Washington politics and some are under scrutiny for conﬂicts of interest tied to funding sources,” he said. “The CIP receives corporate funding but tries to ensure that no single interest predominates.” Indeed, while center activities receive ﬁnancial support from a variety of public and private corporations and foundations — the September event was supported by Google and InterDigital — it adheres to a set of restrictive guidelines in its relationships with ﬁnancially-interested stakeholders.

“We’re Switzerland,” said Benjamin, noting that the center’s four founding and ongoing corporate sponsors rarely, if ever, “collectively agree” on issues pertaining to innovation policy. “Once anybody hears AT&T, Google, Comcast, and Qualcomm, if they know anything about this space, they know that on every single issue, there is some combination of them on opposite sides.”

In addition to fostering dialogue among stakeholders on a range of issues through its conferences, CIP directly engages in policymaking and scholarly debates through the publication of research articles, essays, articles, and white papers that highlight its interdisciplinarity and relevance outside the purely legal sphere.

In a white paper based on data collected by Professor Ashish Arora from Duke’s Fuqua School of Business that stemmed from the CIP conference and congressional brieﬁng on the matter, Merrill voiced concern about upstream research, especially in ﬁelds other than biomedical science, which has been favored by industry, government, and philanthropy.

“Not only has a distinctive 20th century U.S. institution, the great corporate research laboratory, declined or in some cases disappeared, but data suggest that corporate research efforts in general have declined in magnitude and in inﬂuence on the direction of science and engineering,” Merrill said. Government has focused on funding biomedical science, while reducing its overall research funding, he added. “That’s productive but the military is no longer an engine that propels progress in the physical sciences and engineering that underlies economic growth. The paper doesn’t minimize the constraints on the federal budget but does underscore the urgency of increasing investment in ﬁelds like materials, electrical engineering, and chemistry.”

Rai co-authored an article in the November issue of Science titled, “Racing for academic glory and patents: Lessons from CRISPR,” in which she argues that the prominent dispute over gene-editing technology reveals important lessons for administering patents and public research funding, two of the government’s most important innovation incentives. The dispute also highlights the manner in which academic ambitions for scientiﬁc glory interact with patents, she said: “Irrespective of how the scientiﬁc community chooses to allocate glory, winner-take-all races for broad patents are likely to be wasteful.”

A pair of 2016 CIP conferences on patent quality, held in conjunction with the USPTO and the High Tech Law Institute at Santa Clara University School of Law, produced a series of op-eds by conference participants in Law360 and a wrap-up piece assessing the state of patent quality by Rai and Santa Clara Law Professor Colleen Chien in PatentlyO.

On May 4, the center will host a conference addressing another technology in the news today: artiﬁcial intelligence (AI). The event, a collaboration with the Center on Law & Technology and the Rethinking Regulation program at Duke University’s Kenan Institute for Ethics, will explore the promise AI holds for administering diverse governmental functions involving science, technology, and intellectual property, as well as the possible challenges.

“We’re interested in how to promote innovation and in general our past events have looked at private sector innovation and ways the government can promote it,” Rai said. “With this conference we’re looking at turning the lens toward how innovation, in the form of AI, can improve government processes. We all have interacted a lot with agencies in various capacities and know that the informational burden they face is tremendous, so we are interested in mechanisms for improving information processing through AI.”

Government collection of economic and population data, AI and biopharmaceutical research, and automated vehicles will be topics for consideration at the conference, as will the ability of government to adapt to new information and such concerns about AI as a lack of transparency and fairness. “Famously, the concern about AI is it ends up being a black box, it’s hard to tell how the AI has decided on what it’s decided on,” said Benjamin.

The center is also likely to convene future discussions on the patent system following the Supreme Court’s ruling in Oil States, which was argued on Nov. 27, particularly if it has the effect of invalidating PTAB rulings made to date. If so, former PTAB Chief Judge Smith looks forward to the discussion.

“I have participated in two of the Center for Innovation Policy’s recent discussions and my sense is that there would have been no other opportunity to gather in one place the exchange of ideas that took place at those gatherings,” said Smith, a member of the Law School’s Board of Visitors who is now the chief intellectual policy counsel at Ecolab. “To me this is sort of the high-water mark. I think the unique blend of the academic and the practicing world, the policy people, to hear the views and illuminate each other about the different perspectives is more than worth the price of admission.