Salei’s arrest on Sept. 9 in the wake of a contested election has triggered international protest. 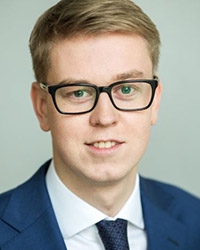 Members of the Duke Law and Duke University communities are calling for the release of Illia Salei LLM ’14, who was arrested on Sept. 9 by the Belarusian government of President Alexander Lukashenko amid ongoing protests following the president’s disputed August re-election.

Salei is an attorney for Maria Kolesnikova, one of the leaders of the Belarusian protest movement and a member of the presidium of the Coordination Council, a non-governmental organization established by exiled opposition presidential candidate Svetlana Tsikhanouskaya following the Aug. 9 presidential election to resolve the political crisis and facilitate a transfer of power. Kolesnikova was arrested on Sept. 8, after thwarting the government’s attempt to forcibly deport her to Ukraine, and remains in detention, as does another attorney engaged in the opposition, Maksim Znak, who also was arrested on Sept. 9.

Salei’s arrest has triggered international protest. He is charged under an article of the Belarusian Criminal Code which concerns “actions aimed at causing harm to national security of the Republic of Belarus.” He was arraigned on Sept. 18 and on Sept. 24, his appeal to be released from custody was denied by a local court in Minsk. Amnesty International has condemned Salei’s arrest and deemed him and the other detainees “prisoners of conscience.”

“The last time I talked with Illia he was getting ready to appear on several European news channels to discuss the election” said Tolga Ozek LLM ’14, who has written to the U.S. Department of State, several senators, and the U.S. House Committee on Foreign Affairs, among others, urging them to get involved in helping secure Salei’s release.

“Illia has always used legal paths to achieve his purpose — defending his clients in the opposition and bringing fair elections to Belarus. He was the lawyer who applied to the Supreme Court of the country to investigate the election fraud. He wasn’t armed, he didn’t use guns, and he didn’t burn places down. He used the legal knowledge that he has and applied to the Supreme Court. It’s not fair for them to charge him with an attempt to overthrow the government. You can’t ‘overthrow’ the government through fair elections.”

Ozek described his classmate and friend as a superb lawyer with an amazing wit. “Illia has a brilliant legal mind, a different perspective, and a fun approach to legal topics,” said Ozek, who trained as a lawyer in Turkey before coming to Duke for his LLM. “He was loved by everyone.”

Ozek noted that Salei’s legal specialty as a senior associate at the law firm Borovtsov & Salei in Minsk is banking, finance, and investment, and he put his successful practice aside to represent the opposition leaders. “He could have got any job he wants in other countries as a lawyer, but chose to stay in Belarus to help the opposition, to provide them legal counselling to have fair elections,” he said. “It was a very bold move on his part because he assumed that there might be retaliation from the Belarus government.”

U.S. Secretary of State Mike Pompeo issued a statement on Sept. 8 condemning the treatment of Belarusian opposition leaders, including Kolesnikova, and demanding their release. But that statement preceded Salei’s detention. “I don’t want him to be forgotten in this process,” said Ozek, principal of Ozek, LLC, in Bethesda Md., an investment and compliance consultancy.

After contacting the U.S. embassy in Belarus directly, Ozek was assured by the chargé d’affaires that diplomats were aware of his detention and that “the United States will continue to call on the Belarusian authorities to … release all who have been unjustly detained, including Mr. Salei,” as well as to end all violence against peaceful protestors.

Associate Dean for International Studies Oleg Kobelev also corresponded on the matter with Patrick Duddy, the former U.S. ambassador to Venezuela who is now a senior advisor to the Duke Office of Global Affairs and directs the university’s Center for Latin American and Caribbean Studies. Duddy also reached out to the embassy about Salei, receiving an assurance that the U.S. Department of State is “tracking his case closely.”

Among the statements of protest against the detention of attorneys Salei and Znak, in particular, is one signed by 84 international human rights organizations, bar associations, law societies, and individuals. The “Open statement in connection with the detention of Belarusian lawyers Ilya Salei and Maksim Znak,” calls the lawyers’ arrest “a gross violation and interference with their professional legal activities and with their rights to express professional opinions, as established by international legal standards.” The statement cites the United Nation’s Basic Principles on the Role of Lawyers (the Basic Principles), that state that governments must ensure that lawyers can perform all of their professional functions without intimidation, hindrance, harassment, or improper interference.

“Lawyers, like other citizens, are entitled to freedom of expression, belief, association and assembly,” the open letter states. “In particular, they have the right to take part in public discussion of matters concerning the law, the administration of justice and the promotion and protection of human rights, and to join or form local, national or international organizations and attend their meetings, without suffering professional restrictions by reason of their lawful actions or their membership in a lawful organization.” The signatories call for Salei and Znak’s immediate release and for the Belarusian government to comply with international legal standards on the independence of lawyers and the exercise of the right to defense, as well as to stop persecuting lawyers who express their opinions while carrying out their professional duties.

Harry R. Chadwick, Sr., Professor of Law Laurence Helfer, co-director of the Center for International and Comparative Law, said that domestic courts in some countries consider guidelines such as the Basic Principles in determining whether an individual’s rights have been violated. “But such situations are rare in countries with repressive governments,” he cautioned.