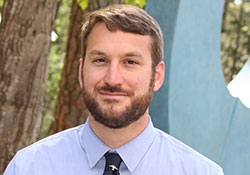 William MacKay Scott, an environmental lawyer who has worked extensively with North Carolina communities to address pollution and justice concerns, has joined Duke Law School as a Fellow in Environmental Law in the Environmental Law and Policy Clinic and a lecturing fellow.

From 2014 to 2018, Scott served as the Yadkin Riverkeeper (riverkeeper), where he monitored and protected water quality in the Yadkin River, engaged in public education and outreach, and managed litigation for the organization of the same name. As named plaintiff in a lawsuit, Yadkin Riverkeeper, under Scott’s direction, negotiated a settlement agreement that required Duke Energy to excavate over five million tons of coal ash from unlined pits along the river near Salisbury, N.C.  Scott also spearheaded a project to map the locations and impacts of large-scale animal agriculture operations statewide, analyzing satellite imagery and flying over affected areas to record the number and type of farms and the locations of impaired waterways.

“Will brings a wealth of on-the-ground experience to our team,” said Clinical Professor Ryke Longest, who directs the clinic. “His leadership at environmental nonprofit organizations gives him unique insight into the needs of our clients. He has taken on environmental issues as an advocate, a lawyer, and a teacher, and that background will be invaluable to faculty, staff and students as we work together to solve environmental problems in underserved communities.”

Represented by the clinic, Scott led Yadkin Riverkeeper’s campaign to address contamination from an aluminum smelter in the historically African-American community of West Badin, N.C., collaborating with faculty and students to eliminate cyanide discharge into local streams and lakes. The clinic continues to be engaged in protecting waterways around Badin, as it has for more than eight years.

Before becoming riverkeeper, Scott managed the campaign of N.C. Rep. John Ager of Buncombe County, a farmer and conservationist. “Campaign polling showed the public’s environmental concern,” Scott said. “The single issue that voters across party lines could most agree on was that private actors should foot the bill for cleaning up their own pollution.”

A graduate of University of North Carolina-Chapel Hill and the UNC School of Law, Scott has taught environmental law and water resources graduate level courses at Wake Forest University and guest-lectured in biology, public health, and environmental science classes at Salem College and UNC-Chapel Hill. During law school and following graduation, he worked as an attorney for the Southern Environmental Law Center.

“The Environmental Law and Policy Clinic represents communities impacted by pollution, climate change, and other environmental issues whose concerns might never otherwise be heard,” said Scott. “I’m excited to work alongside Duke Law students to provide representation on some of today’s most intractable environmental problems.”