The clinic’s work with three partner organizations led to new rules for testing and removing lead from water at N.C. childcare centers and is hailed for innovative approaches to enhancing environmental quality. 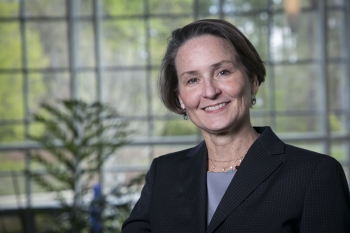 An initiative to protect North Carolina children from water-based lead exposure in which the Duke Environmental Law and Policy Clinic was a key participant has received the 2020 Roy Family Award for Environmental Partnership (the Roy Award) from the Environmental and Natural Resources Program at  Harvard Kennedy School’s Belfer Center for Science and International Affairs.

The multi-year partnership, known as the Clean Water for Carolina Kids program, spurred the adoption of new requirements for testing for and removing lead from drinking and cooking water at licensed childcare centers and pre-kindergarten programs in North Carolina, minimizing exposure to the neurotoxin for more than 230,000 infants, toddlers, and preschoolers in their care. Duke students, led by Clinical Professor Michelle Nowlin JD/MA ’92, the clinic co-director, and Dr. Nancy Lauer, the clinic’s science and policy fellow, devised a regulatory and fiscal framework for the rule that was adopted by the North Carolina Commission for Public Health and went into effect on Oct. 1, 2019.

The bi-annual Roy Award celebrates an outstanding cross-sector partnership that uses innovative approaches to enhance environmental quality. “For almost 20 years, the Roy Family Award has recognized partnerships that provide tangible benefits for people and the environment with the hope that the benefits could be transferred to millions,” said Henry Lee, director of the Environment and Natural Resources Program, in a press release announcing the award. “The 2020 winner more than meets this high standard. The partnership will protect hundreds of thousands of children in North Carolina while providing a replicable model for other states and regions — and a shining example of how science-driven, highly-local approaches can effectively address environmental and public health challenges.”

The Clean Water for Carolina Kids program, which also established a system for testing drinking and cooking water free for all licensed childcare centers in the state, was selected after a rigorous assessment of more than 40 domestic and international partnerships that included peer review by partnership experts from around the world.

“More than a dozen student attorneys and consultants worked on this initiative over the course of several years, conducting scientific research and combing through public records to understand the magnitude of the problem and the most effective strategies for intervention, and conducting legal research to ensure that the partnership’s recommendations were grounded in existing legal authority,” said Nowlin. “It was an incredible opportunity for our students to collaborate with professionals in the field and actually solve a problem that has such devastating impacts on families and our society. We can protect children from lead hazards, as this partnership demonstrates, and can do so without breaking the bank. We hope this effort will be replicated in other states.”

Clinic students based their research and analysis on initial scientific findings of RTI International that showed the presence of lead in water used for drinking, mixing infant formula, and preparing food at childcare centers, and the feasibility of a testing protocol using test kits mailed out and administered by center operators. The student teams researched and wrote reports on the impacts of lead on the developing brain and the associated costs to society; researched and proposed best practices for testing drinking water for lead, mitigation strategies, and their installation and maintenance costs; analyzed federal and state laws governing lead concentrations in public drinking water to identify regulatory gaps; and drafted proposed regulations. The clinic also conducted the preliminary fiscal impact analysis for the proposed rule to inform stakeholders and the general public of the costs and benefits associated with testing and remediating lead in state childcare centers in North Carolina, finding that it could be done in an inexpensive and scientifically robust way.

NC Child undertook the advocacy that encouraged the state to close a regulatory gap under which a childcare center had to test for lead only if a child in care was found to already have been poisoned through blood tests administered by a doctor. The N.C. Division of Public Health used the scientific, legal, and economic analysis to propose an update to the sanitation guidelines for childcare facilities.

“North Carolina is now one of only 11 states that requires lead testing in drinking water in childcare centers,” said Lauer. “That’s a big deal. It tells me that there is a lot more work to be done nationwide, but also that the work of clinic students and this partnership is making North Carolina a leader.”

The Roy Award will be presented to the partners during a virtual celebration this fall hosted by the Harvard Kennedy School.