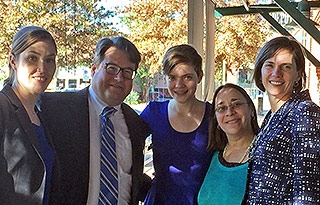 On behalf of clients Hallie Turner, a 14-year-old environmental activist in Raleigh, and Our Children’s Trust, an Oregon-based nonprofit, the clinic is developing a legal strategy it hopes will compel North Carolina to reduce greenhouse gas emissions from power plants. The state is suing the U.S. Environmental Protection Agency over its 2015 Clean Power Plan emission-reduction rules and has shelved all state-level rulemaking regarding greenhouse gasses until that challenge is fully resolved.

The clinic is rooting its advocacy in the public trust doctrine, which posits that government as a trustee has a heightened obligation to protect certain uniquely valuable resources for the beneficiaries of the trust — the public — including present and future generations, said Clinical Professor Ryke Longest, who directs the clinic.

“Courts have recognized that within the nature of government, there are certain precious resources that belong collectively to the people, and that government cannot divest itself of responsibility to act as trustee over those resources,” he said. “It’s a legal recognition of the philosophical concept that we are only stewards, not owners, in an absolute sense, of certain resources, and that we have to steward them with an eye to all the people, including future generations.”

The 1892 Supreme Court ruling in Illinois Central Railroad v. Illinois affirmed the public trust doctrine in federal case law, but it can be traced back to the Institutes of Justinian, the sixth-century Roman legal text that stated that certain categories of property cannot be subject to individual ownership. “The air, running water, the sea, and consequently the shores of the sea, are common to all mankind,” the text reads. “No one is forbidden on the seashore.”

Longest said most court decisions that have cited this passage have been focused on water. Over several years, through academic conferences and consultations, he has been trying to deploy the public trust doctrine in the fight against global warming, an effort launched by Professor Mary Wood of the University of Oregon School of Law.

“She noted that this language Justinian cites also applies to air,” Longest said. “With air pollution, many governments around the world have failed to take any significant action, trying and failing time and time again to reduce greenhouse gasses to reduce the harm which is already being inflicted by global warming.

A belief in this obligation, coupled with the increasing engagement of young people on environmental matters, led Wood to found Our Children’s Trust to advocate on their behalf for legally binding, science-based climate policy. Partnering with lawyers and institutions like the Environmental Law and Policy Clinic, Our Children’s Trust has launched lawsuits and executive branch rule-making actions across the United States and elsewhere on behalf of youth plaintiffs.

The youth connection is key to the success of atmospheric trust litigation, said Longest. “The greatest predictor about your opinion on climate change is age rather than political affiliation. Younger conservatives think climate change matters, older ones don’t. There is a political divide as well, but the generational divide is more pronounced.” With a voting age of 18 and age qualifications for office that require people to be nearing middle age in order to participate significantly in American democracy, it makes sense to allow youth to bring legal actions to compel older elected leaders to take action, he said.

Longest offered the example of the long-ago decision to use lead solder in pipes — a mid-20th century economical plumbing standard.  When officials in Flint, Mich., changed that city’s water source, more acidic water flowed through its system of lead soldered pipes, causing corrosion and the introduction of lead into the city’s drinking water. “Kids started getting elevated blood-lead levels,” he said. “We made decisions back in the middle part of the last century about our use of lead that are having huge consequences to this generation of children and poor communities where lead-based paint is still around and where soil is contaminated because of the lead in gasoline.”

While in some situations decisions are made without all the scientific facts of future harm, the science is clear on climate change, he said. “If we don’t do something now, 50 or 60 years from now terrible damage will result. Yet political figures are saying we should do nothing. In that situation, those who aren’t being heard in the political process and can’t vote to hold their leaders accountable have to seek justice elsewhere — so in this case, it’s the courts.”  In a recent study, the costs of inaction on climate change was calculated as higher than student debt burden, he said.

Giving “the youngest generation” a voice

Clinic client Turner, a high school freshman, traces her climate activism to reading Al Gore’s An Inconvenient Truth: The Crisis of Global Warming, when she was in fourth grade. “It was almost a no-brainer for me to understand that I needed to take action,” on the problem of global warming, she said. “The harder part was actually making my voice heard and thinking I had any power or control over my future. The youngest generation is far too often overlooked, even though we’re the ones who are going to feel the biggest effects of decisions that our leaders make today. It’s foolish not to take action and not to realize that if we don’t act now we won’t have a livable or sustainable future.”

After a lot of online searching, Turner joined an organization of young climate activists called “iMatter” and began blogging and speaking out against climate change. Through iMatter, she eventually connected with Our Children’s Trust.  “I saw there were other youth involved in the organization that were participating in lawsuits with Our Children’s Trust and I decided it was something I wanted to take on in North Carolina.”

Our Children’s Trust connected Turner with Longest in 2013, when she needed advice on filing a petition for rulemaking before the N.C. Environmental Management Commission.  Longest took this work on as a pro bono project during the summer months when the clinic’s students are away. After that petition was summarily rejected by the chair without consideration by the commission, Longest and Stanback Fellow Shannon Arata ’13 worked to support Turner’s attorney in challenging the denial in Superior Court, arguing that the chair lacked the authority to unilaterally deny the petition. A judge denied that challenge and Turner opted not to appeal, partly, Longest said, because the Clean Power Plan was unveiled as her action was pending and opened new avenues for legal action.

Longest subsequently helped Turner prepare a presentation for a commission hearing in Raleigh that urged compliance with the Clean Power Plan and personally participated in another hearing. The outcome: The commission opted to join 23 other states in suing the Obama administration over the plan. “North Carolina is sitting on the sidelines, trying to pick up political points, attacking the federal government, and siding with the coal states,” said Longest.

Now Turner and Our Children’s Trust, which has supported her advocacy, are official clinic clients. Although Longest would not detail administrative or litigation strategy, he said students are looking at the legal obstacles Turner faced in her initial petition to the N.C. Environmental Management Commission. “They are looking at how we can overcome the commission’s objection to rule-making on climate change, and how a case can be framed in court, researching possible causes of action and regulatory approaches,” he said.

“Our Children's Trust is committed to amplifying voices like Hallie's,” said Julia Olson, the organization’s executive director and chief legal counsel. “Governments must be held accountable for their duties to protect our atmosphere. The work that Hallie, Professor Longest, and the Duke clinic are doing in North Carolina can be viewed as a model for how universities and law professors nationwide can work with their communities to make that accountability a reality.”

Turner said she appreciates all of the advocacy efforts on her behalf. “I could talk all day about how amazing the legal team has been and how amazing the whole experience has been,” she said. “The intricacies of the legal process are hard to understand for someone who hasn’t done any of this before. And the people I’ve been working with at Duke have been amazingly supportive and understanding and helpful. They’ve poured so much effort into these actions. I’m incredibly grateful for that.”