Willie George Shaw was released on Jan. 19 after serving nearly six years in prison following an Alford plea for a crime he didn’t commit. 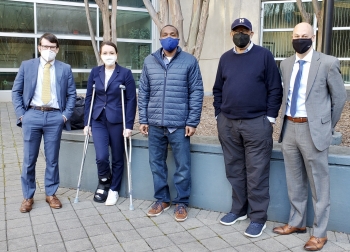 On Jan. 19 a Mecklenburg County Superior Court judge vacated the conviction and ordered the release of Wrongful Convictions Clinic client Willie George Shaw, who spent nearly six years in prison after entering an Alford plea in connection with the death of a nursing home resident. Shaw is the clinic’s 10th client to be exonerated.

"All I can say is I'm happy, I'm thankful, I'm grateful," Shaw told reporters outside the Mecklenburg County Jail. "I'm waiting to see my kids and my mom and trying to put my life back together." Shaw's immediate plans are to travel to Chicago to reunite with family.

“It is always our hope that state prosecutors will join us in correcting miscarriages of justice when they are brought to light, but that only rarely happens in these cases. We are grateful that the Mecklenburg County District Attorney’s Office reviewed the evidence in this case objectively and agreed that it did not support Mr. Shaw’s guilt.”

In May 2015 the state alleged that Shaw, a certified nursing assistant, sexually assaulted an 86-year-old woman while helping her bathe at the Charlotte-area assisted living facility where he was employed. The woman later died of injuries that were allegedly the result of an assault.

In June 2016, under pressure, Shaw entered an Alford plea to felony patient abuse and neglect. An Alford plea allows a defendant to accept punishment while maintaining his innocence. Immediately after entering the plea Shaw began trying to prove his innocence. The Wrongful Convictions Clinic took his case in 2018.

The investigation by clinic students and faculty revealed that the state’s allegations did not match the medical evidence. It also revealed that Shaw’s defense counsel conducted almost no investigation and instead encouraged him to plead guilty rather than proceed to trial, where prosecutors would have enhanced the charge to felony murder. The court denied Shaw’s motion to replace his counsel, and Shaw entered the Alford plea shortly afterward.

In July 2019, the Wrongful Convictions Clinic filed a Motion for Appropriate Relief, alleging that Shaw received ineffective assistance of counsel, and that at the Alford plea hearing state prosecutors failed to state a sufficient factual basis to support a finding that Shaw committed a crime.

At an evidentiary hearing that began Dec. 8, 2020, a forensic pathologist testified that the woman was likely injured 30 minutes to two hours prior to 10 p.m., when she was discovered bleeding in her bed — some seven hours after prosecutors alleged Shaw had injured her. An expert in geriatric medicine also testified that video of the resident after 2:45 p.m. showed she exhibited no signs of injury at that time.

After three days of testimony, the prosecutors requested that the rest of the hearing be delayed so they could review the case in light of the evidence presented by the clinic. After their review, they concluded that the conviction was not sufficiently supported by the evidence and agreed to join the clinic in requesting that Shaw’s conviction be overturned and he be released from prison. Shaw was released on the afternoon of Jan. 19 and was greeted outside the jail by Lau and John S. Bradway Professor of the Practice of Law and clinic co-director James E. Coleman, Jr.

“We are elated for Mr. Shaw,” Coleman said. “He has always maintained his innocence, and our review of the evidence shows he could not have committed a crime. We look forward to reuniting him with his family.”

Duke Law students Megan Mallonee ’21 and Steven Dallas ’21, who assisted in representing Shaw at the evidentiary hearing, also were present at Shaw's release.

"Working on Will Shaw’s case was an extraordinary experience that I will carry with me throughout my legal career," said Mallonee, whose interest in the clinic was sparked during an undergraduate class on race and innocence.

"Working with such a dedicated team to ensure the release of an innocent man has been, although at times gut-wrenching, immensely rewarding. I hope to continue to work on criminal justice reform throughout my career, and I will never forget the feeling of watching Mr. Shaw call his mom to say he would soon be on his way home."

Dallas said his interest began during high school when he attended a Duke Talent Identification Program (TIP) on wrongful convictions. He started working on Shaw’s case as a first year student through the Duke Law Innocence Project.

"I cannot imagine a better start to my final semester of law school than to have been present for Mr. Shaw’s exoneration today, and to know that I played a part in it," Dallas said.

"I am beyond thrilled that Mr. Shaw has finally received some justice in his case, and that he will now be reunited with his family. It was a privilege to work with the clinic’s amazing professors, and I will take with me always the lessons that I learned from them about how to practice law the right way, and strive to live up to them throughout my career. My work with the Clinic has taught me that achieving justice is not always easy, but it always is worth the fight."

Other clinic students who worked on his case are Delaney Garrett ’19 and Grace Hitzeman ’19, who drafted Shaw’s Motion for Appropriate Relief before graduation, and David Yasinovsky ’18, Nick Thomson ’18, Aishwarya Masrani ’19, Kayla Mullen ’20, and Emma Cervantes ’20.

“The clinic’s work is critical in helping to identify injustice in North Carolina and working to remedy it,” said Charles S. Rhyne Clinical Professor of Law and clinic co-director Theresa Newman '88. “Correcting such injustice — as in Mr. Shaw’s case — is a monumental task and would occur much less often without the truly impressive efforts of our remarkable students.”

Shaw is the fourth clinic client in the last two years to be exonerated, along with Charles Ray Finch and Dontae Sharpe in 2019 and Ronnie Long in 2020. Collectively, the four men spent more than 115 years in prison for crimes they did not commit. On Dec. 17, Long was granted a pardon of innocence by North Carolina Governor Roy Cooper, making him eligible to receive the state’s maximum compensation of $750,000 for the 44 years he spent in prison. Pardon applications have been submitted for the other men, according to Lau, as well as for Michael Parker, a client who was exonerated in 2014.

MORE: Watch Mallonee '21 and Dallas '21 talk about the case outside the jail