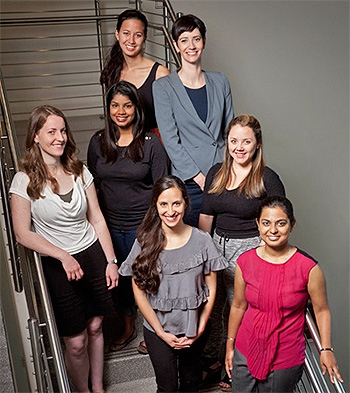 The students’ work in helping to complete a multi-year, multi-stakeholder U.N. initiative marked a successful launch for the clinic, the Law School’s ninth in-house clinical program. In translating complex international legal frameworks  into operational guidelines to facilitate redress for victims, the students honed a range of professional skills, from legal research, analysis, and writing, to strategic judgment, how to lead effective meetings, negotiation, and persuasive advocacy

“I learned a great deal about the importance of methodology and process in research and advocacy, compiling and analyzing large amounts of information from different sources and different countries on laws to address trafficking,” said Laura Ramirez LLM ’14, whose work in the clinic enabled her to secure an internship in the U.N. Office of the High Commissioner for Human Rights in Geneva for the coming fall.

Classmate Prerna Dhoop, who previously studied comparative constitutional law and international human rights law in India, said that she particularly valued the opportunity to contribute to ensuring the implementation of human rights.

“I was especially interested in the effective enforcement of constitutional and human rights protections both domestically and internationally,” she said, adding her appreciation for the levels at which she was able to learn and practice. “The entire experience of drafting the principles  in a team spearheaded by Professor Huckerby, holding meetings at the U.N., and interacting with senior human rights practitioners was just unbelievable and memorable.”

Huckerby, a prominent human rights lawyer and advocate, has been involved as an expert in the special rapporteur’s initiative since it began in 2010, and has presented at regional and global consultations like the one in Jordan. The goal of the “Basic Principles on the Right to an Effective Remedy for Victims of Trafficking in Persons,” she said, is to “close the gap” between rights guaranteed on paper in international, regional, and domestic laws on trafficking, and the way victims are actually treated in practice; they are often arrested, detained, and deported as criminals or illegal immigrants rather than treated as human rights victims.

“These guidelines give governments a clear path for assisting victims, providing a bridge between the protections required under international law and the on-theground realities of trafficking victims,” said Huckerby, who served as a human rights adviser to UN Women (the United Nations Entity for Gender Equality and the Empowerment of Women) prior to joining the Duke Law faculty last year. “This work put our students front and center of a global effort to translate international law into real protections for trafficking victims who rarely receive justice. As a blueprint for how to best guarantee redress for victims, these principles will be used by governments, intergovernmental organizations, and civil society for years to come.”

To produce the principles,  students had to synthesize and analyze inputs from five regional consultations and two global consultations held by the U.N. in 2013 and 2014, taking into account scores of written submissions from U.N. member states and intergovernmental organizations, including the U.N. High Commissioner for Refugees, as well as existing international human rights law and the international law framework on trafficking in persons. As the principles  are designed to apply in a number of different domestic legal systems, students also undertook comparative law research on how countries addressed difficult protection issues, producing guidance on areas such as the rights of victims to temporary or permanent residence, how to calculate compensation for victims, effective bilateral and multilateral arrangements to enforce judgments against perpetrators, and how to address the particular needs of child victims.

Isabella Bellera ’14 described the entire process as “empowering,” and vital to her development as a practitioner now working in a firm known for its practice in public international law; indeed, her first pro bono case on joining the firm in June involved working on behalf of a trafficking victim to seek redress. “In addition to advancing my international law research skills and learning how to draft carefully and precisely, I learned to analyze and synthesize different viewpoints, finding a principled and sustainable middle ground on issues that are politically contentious and much-debated,” she said.

In addition to their work on the guidelines, the students poured enormous effort into preparing their presentation to Special Rapporteur Ezeilo at the U.N. headquarters in New York in March, honing talking points to succinctly convey complex legal analysis and propose workable solutions  on difficult and multi-faceted issues.

And their careful preparation paid off, with Ezeilo commending the efforts of the clinic in her oral presentation to the U.N. Human Rights Council in June and also singling out the clinic for its “invaluable” assistance and “substantive support” in her final April report to the council.

“The special rapporteur applauded the clinic’s work by calling us the future leaders in this issue,” said Sitara Witanachchi ’14. “At that moment, I realized this was the very reason I came to law school. This type of deep involvement in real international issues will always be a defining experience that will guide us throughout our careers.”

Chelsea O’Donnell ’14 agreed. “The meeting at the U.N. was the culmination of our team’s efforts and the most meaningful and memorable experience of my three years at Duke.”

Throughout the semester, Huckerby built in additional opportunities for her students to prepare for careers in human rights law and advocacy at the domestic, regional, and international levels. At the regional consultation in Jordan in January, and again at a one-day workshop in New York in March, she facilitated student-run meetings with policymakers and other practitioners in the institutions (such as the U.N., U.S. Department of State, and domestic and international nongovernmental organizations) and thematic areas her clinic and Advanced International Human Rights Advocacy students had identified as being of interest for their future practice.

“With the support of the Center for International and Comparative Law, the focus has been to enhance students’ networking with human rights practitioners either at Duke Law or in the field, in order to learn about new substantive areas of law, as well as to enable our students to better navigate their career trajectories,” Huckerby said.

The close interaction with human rights practitioners was a fruitful experience, said Emily Spiegel ’14, who served in the Peace Corps and worked in international development prior to attending Duke Law and who has been offered an internship at the U.N.’s Food and Agriculture Organization in Rome for the fall. Spiegel, who also attended the January meeting in Jordan, summed up the benefits of the entire clinic enterprise to future practice.

“We got to see the layers involved in drafting international legal instruments — synthesizing and writing, organizing and practicing and presenting,” she said. “We learned how to break down a complex legal and advocacy project into manageable steps and the importance of developing and following a process as a team. Because we’ve done that, and done it at such a high level, we will always be able to draw on this experience in future practice.” 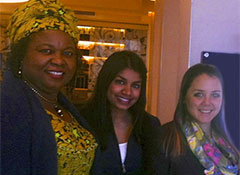