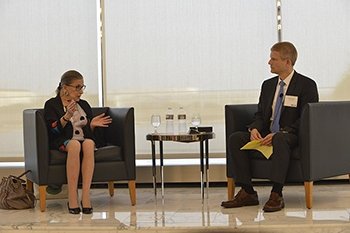 U.S. Supreme Court Justice Ruth Bader Ginsburg addressed some of the Court’s recent decisions, her advocacy for women’s rights, and her current cultural resonance in a wide-ranging conversation with Professor Neil Siegel on July 29.

Ginsburg spoke at the Washington, D.C., offices of Jones Day before a capacity audience of Duke Law alumni and students at the Law School’s D.C. Summer Institute on Law and Policy, which Siegel directs. The event was her third consecutive summer conversation with Siegel, the David W. Ichel Professor of Law and Professor of Political Science, who clerked for her during the 2003-2004 Supreme Court term.

The conversation was part of the curriculum for students at the D.C. Summer Institute, which offers short courses taught by Duke Law faculty designed for individuals considering law school or careers in the public sector.

The event also included a tribute to the nine Duke Law graduates chosen to clerk on the Court since 2010, five of whom were in attendance.

A series of historic rulings

“I keep waiting for the year when we’ll be out of the headlines,” Ginsburg said of the recently concluded 2014-2015 term, which closed with historic and controversial rulings upholding health care reform and same-sex marriage rights. “It hasn’t happened yet.”

Noting that Ginsburg had joined Justice Anthony Kennedy’s majority opinion in Obergefell v. Hodges, which described marriage as a fundamental right guaranteed by the Due Process Clause of the 14th Amendment, Siegel, a scholar of constitutional law and the federal courts, asked whether she would have written it in the same way. “Or would you have written a different opinion, about discrimination on the basis of sexual orientation or discrimination on the basis of sex?” he asked.

Admitting that she would have relied more on the Equal Protection Clause, which she frequently cites in her jurisprudence, Ginsburg noted that Kennedy’s opinion contained “a nice page on equal protection, and the rest is about due process.”

She declined to write a concurring opinion, however, finding that “it was more powerful to have a single opinion.” She said she keeps a volume of the unpublished opinions of Justice Louis Brandeis in her office as a reminder that is it not always prudent for justices to publicly explain every detail of their diverging opinions. 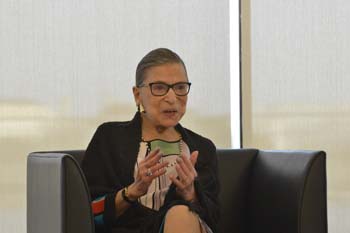 The Court’s decision in King v. Burwell, representing a challenge to the use of federal health care subsidies for those living in states that chose not to set up their own exchanges as part of the Obama administration’s health care reform initiative, reached the only conclusion possible by upholding the use of the exchanges, Ginsburg said.

“In the health care case, Congress obviously wanted people to be able to have health insurance in the way that people who sign up for federal exchanges. There’s no point in having a federal exchange other than for them to work with subsidies.”

Siegel also asked about Ginsburg’s decision to join Justice Stephen Breyer’s dissent in the death penalty case Glossip v. Gross, in which he called for a review of the death penalty’s constitutionality, something neither justice had previously done in their decades on the bench.

“I’m wondering why now?” Siegel asked. “Why not 10 years ago, or 20 years ago? What were the factors of this iteration that you brought to bear in deciding to join that opinion?”

Ginsburg answered that it was a decision borne of experience.

“Justice Breyer was speaking on the basis of his experience for 21 years, what he had seen in the Court’s effort to create a capital punishment that could be administered with an even hand, and he concluded for reasons that he set out at length that it couldn’t be achieved,” she said. Breyer, she added, “pointed to evidence that has grown in quantity and quality” regarding wrongful convictions and executions, poor legal representation, and racial and geographic disparity that leaves defendants accused of identical crimes in different places with radically different chances of facing execution.

When asked by Siegel about whether or not she would characterize 2014-2015 as “a liberal term,” Ginsburg punctuated her answer with one of several references to Gilbert and Sullivan librettos.

“I don’t use those labels,” she said, before quoting the comic opera “Iolanthe”: “‘Nature always does contrive that every boy and every gal that's born into the world alive is either a little liberal or else a little conservative.’” She followed with a statement of her judicial philosophy: “I think I’m very conservative in terms of wanting to preserve the fundamental boundaries of our Constitution.”

Responding to a student’s question, Ginsburg cited Citizens United v. Federal Election Commission as the Supreme Court ruling with which she was most disappointed. Ginsburg said the 2010 majority opinion, which held that political spending is a form of speech protected under the First Amendment, opened the door to massive spending by corporations in support of candidates and is regrettable “because of what has happened to elections in the U.S. and the huge amount of money it takes now to run for office.” She counted United States v. Virginia, in which the Court struck down the Virginia Military Institute’s male-only admissions policy, among the cases of which she was proudest.

Ginsburg, the second woman appointed to the Supreme Court, was a well-known advocate for women’s rights before she became a jurist, co-founding the Women’s Rights Project at the American Civil Liberties Union and prevailing in five of the six gender equality cases she argued before the Court. She discussed the sometimes subtler barriers facing women in the 21st century, noting that when she enrolled in Harvard Law School in 1956, she was one of only nine women in class of nearly 500, and joked that the only available female role models for her as a child were Amelia Earhart and Nancy Drew. 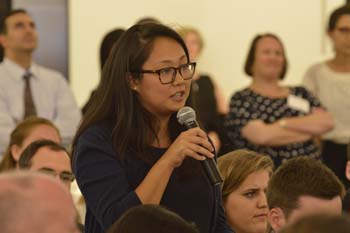 She also described several important cases involving women’s rights, noting that the 1981 ruling in Kirchberg v. Feenstra opened the way for Obergefell. In that case, the Supreme Court used the Equal Protection Clause to strike down Louisiana’s “head and master” rule, a provision of state law that gave sole control of marital property to the husband.

The Court’s ruling in Obergefell was only imaginable after that ruling, she said, because until then, marriage was a “relationship of dominant and subordinate; the nature of the union was not between equals.”

Inspiration, notoriety, and an emerging icon

Joking about the popular online “Notorious RBG” meme that links Ginsburg to the rapper Notorious B.I.G., Siegel asked the justice whether  she might prefer to be called “Notorious One,” instead of Justice. “Is it a surprise to you that now you’re something of a pop icon?” he asked.

Once a law clerk explained the reference to her, Ginsburg said her own research uncovered common ground with the rapper. “Both of us were born and raised in Brooklyn, New York.”

Ginsburg said she greatly enjoyed the premiere of “Scalia/Ginsburg,” a new opera inspired by her friendship with fellow opera buff Justice Antonin Scalia, with whom she frequently disagrees on the bench. She smiled as she recounted a scene in which she breaks through a glass ceiling to help Scalia escape a room where a mysterious figure has trapped him as punishment for his frequent, vociferous, dissenting opinions.

Siegel told Ginsburg that her career serves as an inspiration, recounting a conversation with one of his Summer Institute students.

“This is a very capable young woman who is getting the most out of college and is preparing vigorously for law school,” Siegel said. “When she described what her inspiration was, and the powerful and influential women she looked up to, she said Ruth Bader Ginsburg. I thank you for inspiring her, for inspiring my daughters, and for inspiring the rest of us.”