Ian Kalish, who was previously an associate in the New York office of Cahill Gordon & Reindel, began a one-year fellowship in the clinic in September. 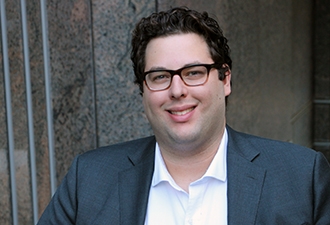 As the First Amendment Clinic fellow for the 2019-2020 academic year, attorney Ian Kalish has been assisting clinical faculty in litigating cases and helping build out the clinic’s Campus Speech Database that tracks free speech conflicts in colleges and universities nationwide.

Kalish, who was previously an associate in the New York office of Cahill Gordon & Reindel, began a one-year fellowship in the clinic in September. The firm is known for its work on landmark First Amendment cases and counts the clinic’s supervising attorney, Nicole Ligon ’16, among its alumni.

“I am thrilled that Ian has joined the clinic for the 2019-2020 schoolyear. He was a pleasure to work with at the firm and has been an asset to the clinic this semester,” said Ligon. Ligon also praised Kalish for his help with supervising students who drafted an amicus brief filed in the U.S. Supreme Court earlier this year.

The First Amendment Clinic advises and represents individuals and groups with First Amendment concerns or claims who cannot afford the assistance of lawyers with specialized First Amendment expertise. Students work under the supervision of Ligon and Professor H. Jefferson Powell, the clinic’s director, and have the opportunity to work directly with clients facing free expression concerns, including defamation, content-discrimination, and reporter’s privilege.

Kalish, who attended Washington University in St. Louis as an undergraduate, followed his interest in antique books and maps to a master’s of library science program at the Pratt Institute. While at Pratt, he worked as a research assistant on the Visual First Amendment project, creating data-driven online visualizations of Supreme Court rulings, and interned in the law library of the U.S. Department of Justice.

After graduating, Kalish entered law school at New York University, where he developed his interest in the First Amendment, including through courses in art law.

“I think initially [the First Amendment] was just an appealing subject because of the complexity,” he said. “It’s sort of like a labyrinth: There's a lot of legal rules and different tests that apply in different situations. But then despite all that, there's a very clear philosophy behind it. The marketplace of ideas is a very clear and powerful rationale.”

In addition to helping clinical faculty on litigation of cases and filing of amicus briefs related to the First Amendment, Kalish is working with students to build out the Campus Speech Database, which was launched last summer. The repository, which was funded by a grant from the Stanton Foundation, is a resource for higher education administrators on handling free speech issues and also provide guidance for practitioners litigating campus speech claims and students who want to understand their rights.

“The campus is one of the strongest marketplaces left,” Kalish said. “It's one of the few places in life where you can sit and listen to speakers presenting a really diverse set of ideas. You can make up your own mind, and everyone is very engaged in learning.

“We're going to try and emphasize why that's important to a student. So that they can develop their sense of the First Amendment and why freedom of expression is important.”