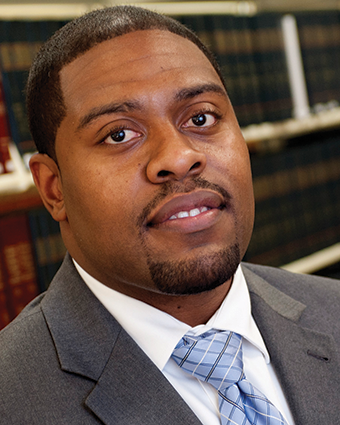 H. Timothy Lovelace, Jr., a noted legal historian of the civil rights movement, will join the Duke Law faculty in June from the Indiana University Maurer School of Law, where he is a professor of law.

Lovelace, whose work examines how the civil rights movement in the United States helped to shape international human rights law, is the author of numerous articles and a forthcoming book, The World is on Our Side: The U.S. and the U.N. Race Convention (Cambridge), which examines how U.S. civil rights politics shaped the development of the International Convention on the Elimination of All Forms of Racial Discrimination. He served as Duke’s John Hope Franklin Visiting Professor of American Legal History in the spring 2019 semester, when he delivered the Robert R. Wilson Lecture. He is returning to the faculty as the John Hope Franklin Research Scholar.

At Indiana University, where he teaches American legal history, constitutional law, and race and the law, and is affiliated faculty in the Department of History, Lovelace received the Trustees’ Teaching Award in 2015. During the 2015-2016 academic year, he served as a Law and Public Affairs Fellow at Princeton University.

“His forthcoming book reflects years of archival research and provides a groundbreaking perspective on how the treaty was developed. In doing so, the book shows that not only was U.S. civil rights law influenced by international affairs but that the direction of influence also operated the other way, with U.S. law and legal concepts influencing the development of international human rights law. Tim combines meticulous research with a compelling focus on the key individuals who helped shape and present the U.S. position during the negotiations.”

Lovelace is currently a visiting professor of law at the University of Virginia, where he received his BA, JD, and PhD, and served as assistant director of the Center for the Study of Race and the Law prior to joining the Indiana law faculty in 2012. During law school he was an Oliver Hill Scholar, the Thomas Marshall Miller Prize recipient, and the Bracewell & Patterson LLP Best Oralist Award winner. As a doctoral student in history, he was a Virginia Foundation for Humanities Fellow and the inaugural Armstead L. Robinson Fellow of the Carter G. Woodson Institute for African-American and African Studies.

“I am thrilled to welcome Tim Lovelace to the faculty,” said Kerry Abrams, the James B. Duke and Benjamin N. Duke Dean and professor of law. Abrams met Lovelace when he was a student in her Family Law class early in her teaching career at UVA and said he made an instant impression: “This young man kept pushing me to move beyond the doctrine and think about the history of family law and to think about the philosophical foundations and the theory. We are very lucky to have him at Duke.”

Raised in Roanoke, Va., where both of his parents were active in civil rights — his mother talked often of desegregating the city’s schools as a student — Lovelace entered law school intent on making that the focus of his practice. He switched to an academic track after identifying complementary interests in critical race theory and legal history. “I decided to write about the civil rights lawyers and leaders that I had heard so much about growing up,” he said.

Lovelace’s early archival research unearthed a rich trove of mutual engagement between activists seeking to end Jim Crow in the U.S. South and the development of an international human rights framework at the United Nations in the 1960s. “I was looking at a protest led by the Student Nonviolent Coordinating Committee — the ‘shock troops’ of the civil rights movement — at a U.N meeting in Atlanta in January of 1964,” he said. “I had to ask: Why is the U.N. in Atlanta in 1964?” Digging in, he found that members of the U.N. Sub-Commission on the Prevention of Discrimination and Protection of Minorities, the primary drafters of the U.N. Race Convention, had been invited to study developments there by the Sub-Commission’s U.S. member, civil rights attorney Morris Abram. “Local people and local activism were helping to inform the development of the world’s most comprehensive treaty on race.”

That insight has proved foundational since to a research agenda that illuminates the activities and influence of a broad cast of civil rights attorneys and activists, adds to the understanding of black internationalism in the 20th century, and offers the South as a robust, largely overlooked space for the development of international human rights laws and norms.

“Commonly, in the popular narrative, the South is not part of the genealogy of international human rights,” Lovelace said. “It’s seen as parochial, provincial, a closed space, and a closed society — anything but this really vibrant space.”

In his article on the Sub-Commission’s visit to Atlanta, “Making the World in Atlanta's Image: The Student Nonviolent Coordinating Committee, Morris Abram, and the Legislative History of the United Nations Race Convention,” 32 Law & History Review 385 (2014), Lovelace depicts a “Cold War battlefield” on which two approaches to racial progress clashed. Abram and others sought to use diplomacy to infuse international law with values central to American democracy in the measured hope of also achieving the full manifestation of those values at home. Student activists, including SNCC leaders John Lewis and Julian Bond (who Lovelace got to know at UVA as a professor, mentor, and friend) demonstrated to expose the inhumanity of Jim Crow to international visitors, bargaining that embarrassment on the world stage could force systemic change in the U.S.

Lovelace — who has also written about the insights Dr. Martin Luther King, Jr. gained on the power of nonviolent protest from his travels to a newly independent Ghana and a black foreign correspondent’s invocation of both U.S. constitutional law and international human rights laws in his successful fight to claim his right to return to the United States after defying the ban against travel to Cuba in 1961 — goes deeper into the history of the U.N. Race Convention in his forthcoming book.

He offers a preview in “Civil Rights as Human Rights,” an article forthcoming in the Duke Law Journal and the subject of his 2019 Wilson Lecture. It begins with the U.S. State Department’s 1963 appointment of Abram, who was King’s Lawyer, a founder of the Lawyers’ Committee for Civil Rights, and a voting rights advocate, to the Sub-Commission drafting the Convention, and Clyde Ferguson, then the dean of Howard University School of Law, as his alternate. The selection of two high-profile civil rights lawyers — one black, one Jewish, both southerners and veterans of World War II — was strategic as well as groundbreaking for the State Department: The U.S., sought to “rebrand” the image of American democracy that was tarnished in the international community for its denial of democracy to African Americans, he notes.

“The U.S. delegation literally embodied the nation’s commitment to racial progress,” he writes. “Together, these men told a remarkable story of how America’s ongoing social transformation could serve as a model for the world.” Their charge was to incorporate principles of U.S. constitutional law and policy into the Convention so that, Lovelace said, “the U.S. could argue that it was at the vanguard of racial progress.”

Abram and Ferguson had their own reasons for “leveraging their identities … to symbolize the U.S.’s devotion to racial justice,” Lovelace writes, for one believing their engagement in the treaty process could build synergies between the civil rights movement and U.S. foreign policymakers, and give the cause a new tool in the fight to dismantle Jim Crow.

The two “racial diplomats” crafted the Convention’s first draft with a framework similar to the equal protection concept in the 14th Amendment, he writes; it mandated equal justice under the law, equal access to public facilities, and an end to all governmental and other public policies of racial segregation, and advanced the implementation of “special measures” — affirmative action — as a form of restorative justice. Lovelace details their considerable success in defending those principles through the Sub-Commission’s debates (and against challenges from the Eastern bloc), building a legislative record for the Convention that would credibly allow the U.S. to argue that its pledge to eliminate racial discrimination in all public authorities and institutions applied to governmental entities only and in that way conformed to the U.S. state action doctrine.

Lovelace explains that Abram, Ferguson, and other racial liberals incorrectly bargained on the state action doctrine quickly disappearing; the Warren Court then seemed on track to “eviscerate both public and private discrimination” against racial minorities. But it didn’t, and a racial paradox remained, he writes: “Two pioneering civil rights attorneys advanced a reading of the Convention that circumscribed the treaty’s definition of racial discrimination.”

His book ends, Lovelace said, with a discussion of Justice Ruth Bader Ginsburg’s citation to the U.N. Race Convention in her opinions upholding affirmative action in higher education in Gratz v. Bollinger and Grutter v. Bollinger. “She was deeply criticized by many people for citing to this ‘foreign source’ and Congress even held hearings around the proper usage of foreign sources in constitutional adjudication,” he said. “But the history of the Convention shows that these critics are not correct. The reason she could cite the human rights Convention so easily was because the ‘special measures’ were produced by Americans, Morris Abram and Clyde Ferguson.”

Lovelace said he is delighted to be returning to Duke, having found an “intellectually rich, warm, and welcoming community” when he served as the John Hope Franklin Visiting Professor of American Legal History — itself a “huge honor.” “John Hope Franklin was so productive, so thoughtful as a scholar, such a pioneer,” he said of the legendary historian who taught at Duke Law from 1985 to 1992. He also enjoyed having a “front row seat” to his former professor’s first year as dean at Duke Law.

Lovelace has even deeper Duke ties, forged through his longtime participation in the Law School’s Culp Colloquium and Emerging Scholars Program that help prepare minority scholars enter and advance in the legal academy through job talks, advice, and scholarship workshops. In addition to getting valuable feedback from multiple faculty on scholarship, Edward and Ellen Schwarzman Professor of Law Guy-Uriel Charles, who leads the programs, quickly emerged as a mentor.

“Tim is one of the most exciting legal historians in the legal academy,” Charles said. “He is a careful and smart scholar. We are extremely lucky to attract him to Duke.”