Professor Arti Rai calls for Congress to give the USPTO director a unilateral right of review over decisions of administrative patent judges. 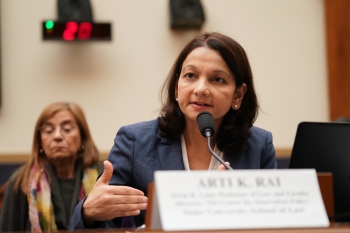 Elvin R. Latty Professor of Law Arti Rai testified before the U.S. House Committee on the Judiciary’s Subcommittee on Courts, Intellectual Property, and the Internet on Nov. 19 in a hearing titled “The Patent Trial and Appeal Board and the Appointments Clause: Implications of Recent Court Decisions.” (Read Rai’s written testimony.)

The hearing considered implications of an Oct. 31 ruling of the U.S. Court of Appeals for the Federal Circuit in Arthrex, Inc., v. Smith & Nephew, Inc., Arthrocare Corp., in which the court held the appointment of the administrative patent judges (APJs) to the Patent Trial and Appeal Board (PTAB) of the U.S. Patent and Trademark Office (USPTO) by the U.S. Secretary of Commerce to be in violation of the Constitution’s Appointments Clause. The court severed the portion of the Patent Act that restricts removal of APJs from office, thereby making them “inferior officers” that can be appointed by “heads of departments” like cabinet secretaries, as opposed to “principal officers” that must be nominated by the president and confirmed by the U.S. Senate.

After exploring different implications of the Federal Circuit’s ruling Rai, the faculty director of the Duke Center for Innovation Policy and an internationally recognized expert in intellectual property law, innovation policy, administrative law, and health law, testified that the “cleanest path forward” would involve “surgical” congressional intervention that gives the USPTO director a unilateral right of review over APJ decisions including, potentially, a right that applies retroactively.

“This approach would cure any perceived constitutional infirmity without subjecting APJs to political pressure that isn’t transparent,” she wrote in her prepared testimony submitted in advance of the hearing. “In order to accommodate the director’s workload, the right of review should be discretionary.”

Rai referred members of the subcommittee to a recent report by Michael Asimow for the Administrative Conference of the United States that details how other agencies that don’t use administrative law judges, but nonetheless conduct relatively formal administrative adjudications on a large scale, structure review by agency heads as a valuable reference and “exhaustive study of the landscape.” It confirms her advice to the Judiciary Committee, she said, that “bright-line mechanisms for ensuring unilateral director control are likely to represent the safest option.” (She further referred the panel to a recent article by Chris Walker and Melissa Wasserman, “The New World of Agency Adjudication,” 107 California Law Review 141 (2019) that offers a summary of Asimow's work as applied to the PTAB.)

In 2009-2010, Rai served as the administrator of the Office of External Affairs at the USPTO, leading policy analysis of the patent reform legislation that ultimately became the America Invents Act and working to establish the USPTO’s Office of the Chief Economist. She earlier served on President-elect Obama’s transition team reviewing the USPTO.

Rai has written a number of articles and book chapters, both doctrinal and empirical, discussing the PTAB. These include: “Administrative Power in the Era of Patent Stare Decisis,” 65 Duke Law Journal 1561 (2016) (with Stuart M. Benjamin); and “Strategic Decisionmaking in Dual PTAB and District Court Proceedings,” 31 Berkeley Tech Law Journal 45 (with Saurabh Vishnubhakat and Jay Kesan); and chapters contained in the two volume Research Handbook on the Economics of Intellectual Property Law (Edward Elgar2019), edited by Peter Menell, Ben Depoorter, and David Schwartz.

“Since its creation, the PTAB has played a very important role in ensuring patent quality,” Rai testified. “As envisioned by Congress, it has allowed the USPTO to correct initial errors in patent grants in a manner that is faster, cheaper, and more expert than Article III adjudication.” The USPTO has, additionally, implemented a series of steps to improve PTAB operation in line with recommendations in her work and that of other scholars and commentators.