Russia and Non-Compliance with European Court of Human Rights Judgments 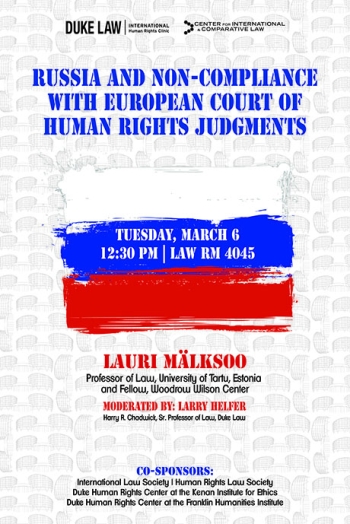 Lauri Mälksoo, Professor of International Law at the University of Tartu (Estonia), currently in residence at the Woodrow Wilson Center, will give a talk on “Russia and Non-Compliance with European Court of Human Rights Judgments.” Lauri Mälksoo will discuss compliance with judgments within the European Court of Human Rights (ECtHR), a long-standing issue that has sharpened after the Council of Europe (CoE) expanded its membership in the 1990s. He will focus on resistance to comply with payment of compensation to victims as well as the more complex problem of so-called general measures (such as legislative changes to achieve justice or to avoid similar kinds of human rights violations in the future). In July 2015, the Russian Constitutional Court decided that Russia would not implement judgments of the ECtHR if the judgments were considered counter to the Russian Constitution. The Russian Constitutional Court has decided in two cases (Anchugov and Gladkov and Yukos) that implementation of the respective judgments of the ECtHR would be unconstitutional in Russia. Mr. Mälksoo will also discuss traditionalist and sovereignty-centered interpretations of human rights in Russia that challenge the liberal/Western ideology of human rights and that are part of the impetus behind the resistance to comply with Strasbourg judgments.