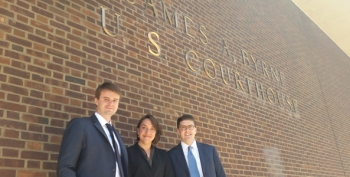 Russell Taylor ’16, a student in Duke's Appellate Litigation Clinic, argued a case in the United States Court of Appeals for the Third Circuit on April 18, in Philadelphia.  Taylor argued on behalf of the appellant, Charles Mack, in Mack v. Yost, before a panel consisting of Chief Judge Theodore McKee and Circuit Judges Julio M. Fuentes and Jane R. Roth.  Two other third-year Duke Law students in the Clinic, Anne Showalter and John Bailey, worked on the case through briefing and oral argument.

The Third Circuit had appointed Sean Andrussier ’92, director of the yearlong Appellate Litigation Clinic, to represent Mack, a federal inmate in Pennsylvania who is appealing a federal district court’s dismissal of his civil rights action.  The appeal involves claims under the First Amendment’s Petition and Free Exercise Clauses as well as the Religious Freedom Restoration Act (RFRA).  Among the issues are whether an inmate’s oral grievance is protected expression under the Petition Clause, whether a Bivens action for damages may be implied under the Free Exercise Clause, and the scope of the RFRA.

Under Andrussier's supervision, Taylor, Showalter, and Bailey worked on the appeal starting with the opening brief.  All were in Philadelphia for the oral argument.  Arguing for the defendants was counsel from the United States Attorney’s office in Pittsburgh.

“Arguing before the Third Circuit was the highlight of my Duke Law career,” said Taylor, who will clerk next year for a judge on the U.S. Court of Appeals for the Tenth Circuit.  “It was a privilege to represent our client before such a distinguished panel, and I am truly grateful for the boundless support of Professor Andrussier, my teammates, and the school,” he added.

Andrussier said the case exposed the students to the rigors of appellate practice as well as a broad range of constitutional and statutory issues. “The students had to master and apply an array of doctrines that would be covered in an intensive course on federal courts, while plunging into real-world appellate practice on behalf of our client,” he said.  “They sorted through a number of legal and tactical issues while working collectively to develop strategy and arguments.  It was a team effort all the way.”

The team work made the experience particularly memorable for Showalter, who will be clerking next year for a federal district judge in Florida before doing a second clerkship for a judge on the U.S. Court of Appeals for the Eleventh Circuit. “Between the strong camaraderie and the intellectual rigor, no single experience has made me so excited to begin my career as a lawyer,” she said.

Bailey, who will be clerking next year for a judge on the U.S. Court of Appeals for the Third Circuit, also commended the learning experience. “To work on this complex appeal alongside such a talented team was a rigorous, rewarding, and meaningful endeavor,” he said.