Abbey McNaughton ’19 argued in the Third Circuit in May on behalf of a client challenging his federal sentence for a drug crime on a Sixth Amendment claim of ineffectiveness of sentencing counsel. 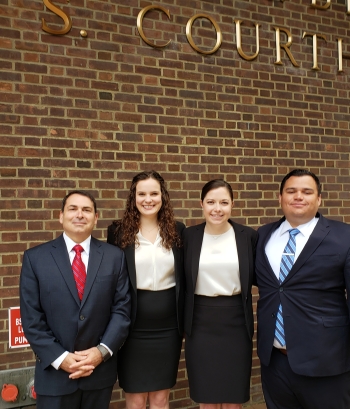 The U.S. Court of Appeals for the Third Circuit has ruled in favor of a client of Duke’s Appellate Litigation Clinic with an opinion published on Nov. 29. The case was argued in the Third Circuit in May by Abbey McNaughton ’19.

The client, Peter Sepling, was challenging his federal sentence for a drug crime on a Sixth Amendment claim of ineffectiveness of sentencing counsel. In its opinion, the court held that the sentencing counsel was deficient for failing to research and argue, based on scientific data, about the drug in question, which wasn’t listed in the federal sentencing guidelines. The court vacated Sepling’s sentence and remanded his case for resentencing.

The Third Circuit had appointed clinic director Sean Andrussier ’92 to represent Sepling. Under Andrussier’s supervision in the last academic year, a team of three third-year clinic students worked on the appeal under the court’s student-practice rule. Along with McNaughton, Nicolas Rodriguez ’19 and Kelsey Smith ’19 entered appearances as student counsel and worked on the appeal from the opening brief through the reply brief and oral argument. McNaughton argued the case on May 23 in Philadelphia before a panel consisting of Judges Theodore McKee, Patty Shwartz, and Julio Fuentes.

In a footnote to the opinion, the court commended Andrussier and the three students for having “submitted an excellent brief and provided exemplary representation to Mr. Sepling,” and singled out McNaughton as having “presented an exceptional oral argument.”

Andrussier said the case exposed the students to the rigors of appellate practice and many aspects of federal sentencing. “The students had to gain expertise in federal sentencing and other legal issues, as well as empirical and scientific matters, all while plunging into real-world appellate practice on behalf of our client,” he said. “It was a team effort as we sorted through a number of strategic and tactical choices.”

Following the oral argument in May, Rodriguez noted how much the case had taught him. “The challenging and interesting work reinforced the importance of collaboration, attention to detail, and service to others,” he said. Added Smith: “The clinic provided me with practical, hands-on appellate experience. The work was challenging, but the experience was incredibly rewarding.”

Smith and Rodriguez are clerking for judges in Texas: Smith on the Texas Supreme Court and Rodriguez for a federal judge. McNaughton is working at a D.C. law firm before she begins a federal appellate clerkship at the Third Circuit.

“The Appellate Litigation Clinic was the most meaningful experience of my Duke Law career,” McNaughton said in May. “I’m immensely grateful for the opportunity, and it was an honor to represent our client at oral argument and to begin my legal career with this experience.”