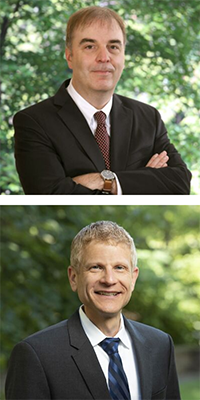 Professors Ernest Young and Neil Siegel have co-authored two friend-of-court briefs they have filed with others in two cases coming before the U.S. Supreme Court in the coming term.

The two scholars of constitutional law and federal jurisdiction have filed a “Brief of Public Law Scholars as amici curiae in support of petitioners” in Frederick L. Allen and Nautilus Productions, LLC, v. Roy A. Cooper, III, as Governor of North Carolina, et al, which will be argued before the Court on Nov. 5. A second brief joined by other public law scholars and concerned landowners supports the petitioners’ request for certiorari in Karolyn Givens, et al, v. Mountain Valley Pipeline, LLC. Both cases appeal decisions by the U.S. Court of Appeals for the Fourth Circuit.

Allen: “Refining Seminole’s impact”
Allen v. Cooper has the potential to be the most important state sovereign immunity case in many years, according to Young, the Alston & Bird Professor of Law and a leading expert on the constitutional law of federalism. The issue before the Court concerns the constitutionality of the Copyright Remedy Clarification Act (CRCA), under which states that infringe federal copyrights can be held liable for monetary damages. Allen is a videographer specializing in underwater photography who filmed the recovery of a shipwreck believed to be the pirate Blackbeard’s flagship, the Queen Anne’s Revenge. He sued the state of North Carolina for unauthorized use of his images, but had a successful district court ruling reversed by the Fourth Circuit. The appellate court held that the CRCA could not abrogate the state’s sovereign immunity under the Eleventh Amendment and, as a result, that states can’t be sued for copyright infringement.

Young and Siegel, the David W. Ichel Professor of Law and Professor of Political Science, are joined on the brief by another scholar of constitutional law and civil rights, Samuel Bagenstos, the Frank G. Millard Professor of Law at the University of Michigan. Their purpose in filing their brief, they write, is to suggest a path for resolving the case in a way that is “faithful to the Constitution’s text and history” and “minimizes disruption” to the Court’s state sovereign immunity jurisprudence. That jurisprudence stems from the Court’s 1996 ruling in Seminole Tribe of Florida v. Florida. In the scholar’s view, Seminole wrongly held that Article I of the U.S. Constitution did not give Congress the power to abrogate the states’ sovereign immunity; in particular, Seminole reached beyond the text of the Eleventh Amendment and strayed from the founding generation’s treatment of common law doctrines and view of state sovereignty. But the scholars argue that Allen “can be a vehicle for refining Seminole’s impact without repudiating its central holding.”

The key to the scholars’ argument is the Court’s unanimous 2006 decision, written by Justice Antonin Scalia, in United States v. Georgia.

“Georgia held that federal statutes abrogating state sovereign immunity are always valid when invoked by a plaintiff who can establish not only a statutory violation but also a constitutional one — whether or not the statute would also be valid if prophylactically applied to state conduct that is not unconstitutional,” they write. “This is the narrowest form of abrogation under Section 5 of the Fourteenth Amendment.”

“We offer the Court a middle ground,” Young explained in an interview. “It’s a narrow but important and functional way of resolving the case and would give meaningful relief in cases where people have actual constitutional rights at stake.” Basing their reasoning on a unanimous ruling should give the nine current justices a solid basis for agreement, he added.

Young, Siegel, and Bagenstos make it clear in their brief that they have no wish to undermine the central argument made by petitioner and by other amici — that the CRCA’s abrogation of state sovereign immunity for copyright infringement is sound. Petitioners argue that Congress’s enumerated power to protect copyright entails a waiver of state immunities in the plan of the Constitutional Convention, and Young and Siegel agree that copyright “is a strong candidate for such a waiver” under the Court’s 2006 ruling in Central Virginia Community College v. Katz, which held that the Bankruptcy Clause of the Constitution abrogates state sovereign immunity. But because Katz was both complex and controversial when decided, the scholars thought it important to offer the Court a more straightforward alternative that might attract a broader consensus among the justices.

Each of the brief’s co-authors has a deep scholarly connection to the issues and arguments at the heart of Allen and make them central to their courses on constitutional law and federal courts. Bagenstos argued United States v. Georgia in the Supreme Court on behalf of one of the petitioners, a disabled inmate. Siegel clerked for Justice Ruth Bader Ginsburg during the October 2003 term, when the Court decided Tennessee v. Lane, another important state sovereign immunity case. And for Young, clerking for Justice David Souter during the 1995-1996 term while the justice was crafting his lengthy — and scholarly — dissent in Seminole was formative.

“It was probably the best intellectual experience of my life,” Young said. “I don’t know if I would have ended up being a professor if I hadn’t been clerking at that time. It’s certainly what got me really interested in federalism, which is what I spend most of my time on.”

Givens: Opposing “quick takes” of land by private interests in eminent domain proceedings
The question before the Court in Givens is whether a district court conducting eminent domain proceedings on behalf of a private condemnor has the power to issue a preliminary injunction ordering immediate possession of the property prior to a trial determining the just compensation owed to the owners of the land being taken. The Fourth Circuit allowed that sort of “private quick take” of land by a company building a natural gas pipeline with the approval of the Federal Energy Regulatory Commission (FERC). Young, Siegel, and the scholars who joined the brief call that an “indefensible” ruling, both in its interpretation of the eminent domain provision of the Natural Gas Act (NGA) and of the district court’s equitable powers under Section 65(a) of the Federal Rules of Civil Procedure.

The six public law scholars who joined in the brief share an interest in the parameters of the government’s power of eminent domain and remedial powers of the federal courts, and they reflect both conservative and progressive points of view in their broader bodies of scholarship. They point to “a real and mature circuit conflict” regarding the central issue in the case in urging the Court to grant a writ of certiorari; with Givens, the Fourth Circuit is the sixth circuit to authorize district courts to effectively create a quick take procedure, while the Seventh Circuit has rejected it. The scholars argue that the Seventh Circuit’s approach, demanding completion of the full process of eminent domain before granting a private party’s a right of occupancy to the land, is correct.

“The NGA’s eminent domain provision creates a ‘straight condemnation’ procedure by which condemnors become entitled to possession only at the end of the proceeding,” the scholars write in their brief. They cite the Court’s 1984 ruling in Kirby Forest Industries, Inc. v. United States as the leading case on the federal government’s statutory authority to take land. “This Court’s precedent makes clear that, in straight condemnation, the right to possession transfers only after the determination and payment of just compensation.”

The brief includes noted libertarians and property-rights advocates like Ilya Somin and Jonathan Adler, as well as leading progressive environmentalists like former Duke professor Jedediah Purdy. Young said scholars from different ideological perspectives found easy agreement on the issues. “We are trying to protect the property rights of small landowners in Virginia and West Virginia in an environmentally sensitive area. A pipeline company or an oil company might clear-cut the land after getting it with a quick take and then, if a permit doesn’t go through, abandon the project. It might say, ‘Here’s your land back but, of course, we’ve cut down all the trees.’”

“It’s bad enough that [through the FERC permitting process] we’re delegating the governmental power of eminent domain to private entities, but delegating the most extreme form of it, which is the power that instantly gives access, is something for Congress to do. And Congress has always reserved that for the government itself.” The scholars emphasize this point in their brief, writing that “although some statutes authorize the Government to execute ‘quick takes,’ all agree that the NGA includes no such provision. And we are unaware of any statute conferring that drastic power on private actors.”

Scholars helping the Court
As a lead author and counsel of record on both briefs, Young notes the special role scholars can play as amici. He referred back to a speech Chief Justice John Roberts made to the Fourth Circuit Judicial Conference in 2011 in which he complained that legal scholarship is often overly esoteric and irrelevant to the work of lawyers and judges.

“I’ve always tried to make my amicus practice kind of an answer to that criticism,” Young said. “With these briefs we’re saying, ‘We’re trying to be helpful. We’re writing a mini-law review article about the cases on your desk and are bringing our scholarship to bear on the problem that you’re facing.”

And scholars have particularly important contributions to make in a case like Allen, he added: “Basically all the states’ immunities jurisprudence is interconnected. If you push on one point, another will fall. You can’t just think about how the case bears on copyright. You have to think about what a particular outcome could do to the entire jurisprudence under Section 5 of the Fourteenth Amendment, and so on. So I think it helps to have scholars weigh in who bring a broader perspective on the whole area and how it all fits together.”