Convocation speaker advises graduates to prepare well so they can “meet their moment.” 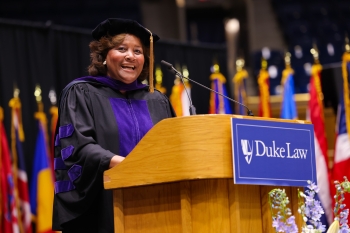 Judge J. Michelle Childs MJS ’16 of the United States District Court for the District of South Carolina urged Duke Law School’s class of 2022 to trust their preparation and allow destiny to direct them in her Convocation address May 7.

“Serve people, not just professional accomplishments. Step into your role for your community, your clients, your environment, and your nation,” Childs said. “Do not shy away from opportunities, and know that when you are ready, they will find you. My task, always, and your task now, is to use your education, your skills, and your hope for the future, to ensure that when these doors open, you are prepared to walk through them and pull others through with you.”

The ceremony in Cameron Indoor Stadium honored 212 JD graduates, 19 of whom also earned a Master of Laws, or LLM, in international and comparative law, and seven of whom also received an LLM in law and entrepreneurship. Seven JD graduates also earned a graduate degree from another department or school at Duke University in addition to their JDs. Twenty-four JD graduates received the Public Interest and Public Service Law certificate.

Sixty-two graduates of law schools in other countries received their LLM degree. Two graduating students received the Doctor of Juridical Science (SJD), the highest degree in law. Also recognized were five trial and appellate judges who received a Master of Laws in Judicial Studies in 2020 but did not have an in-person ceremony.

Convocation was livestreamed for those who could not attend and a recording will be available at a future date on Duke Law’s YouTube channel.

“You have honed your powers of persuasion, problem-solving, empathy, and how, in Dr. King’s words, to bend the arc of history toward justice. Now it’s time to go out and exercise your power with care,” James B. Duke and Benjamin N. Duke Dean and Professor of Law Kerry Abrams told the class in her opening remarks.

“As Duke Law alumni, you will have the opportunity to join the many graduates of this institution who use their power as lawyers to effect critical change in the world. You will have an obligation, wherever your career takes you, to serve your community and help those who are less fortunate, as so many of our alumni do. And you will have a responsibility to uphold the tenets and traditions of the legal profession and the rule of law for all people, even when doing so doesn’t serve your personal interests. This is what it means to be a lawyer, and it makes me so proud that you have all chosen to be one.”

“Uphold the rule of law, but fight the gaps in its application”

Childs, the 2022 distinguished speaker, told assembled graduates and guests that Duke Law’s Masters of Judicial Studies Program had prepared her for the high-profile opportunities that recently have come her way. Childs currently is awaiting confirmation to a seat on the U.S. Court of Appeals for the District of Columbia Circuit, for which she was nominated by President Joe Biden in January. She was also one of three judges the president considered this spring to replace retiring Justice Stephen Breyer on the U.S. Supreme Court.

“The skills and knowledge instilled by this fine institution, and the treasured connections it allowed me to foster with faculty, colleagues, and new friends, undoubtedly prepared me to meet challenges of which I could only dream,” Childs said. “When I finally had my confirmation hearing for my nomination to the DC Circuit before the US Senate Judiciary Committee last week, I knew no matter the question, no matter the level of scrutiny, a life’s worth of aspiration, preparation, and determination had trained me for that moment. You too, are ready for the most unimaginable and unexpected opportunities.”

Reflecting on the role of the courts and of lawyers, Childs reminded the class that they will serve their profession not only as counselors and advocates but as officers of the court who hold the practice and administration of law in trust, especially in times of conflict and strife.

“In these three short years, you have encountered and participated in legal debates surrounding the pandemic, challenges to civil rights laws and individual liberties, and witnessed the atrocities of a war. And as you prepare to meet the challenges of our time, elevate yourself to this promise of democracy,” Childs said.

“But of course it has perils,” she continued. “You have to ensure the unpopular, the poor, and those on the margins are protected equally, just as those who are rich and powerful, and that all voices, yearning for justice, will be heard. Whether you represent individuals, organizations, plaintiffs or defendants, this nation or its states, uphold the bedrock promise of the Constitution, and enforce its guarantees for all. You uphold the rule of law, but you also have to fight the gaps in its application.”

A graduate of the University of South Florida and the University of South Carolina, where she earned a JD and a master’s degree, Childs rose at Nexsen Pruet to become the first Black woman partner at a major law firm in South Carolina and received gubernatorial appointments to the state’s Department of Labor, Licensing, and Regulation and Worker’s Compensation Commission. In 2006 the South Carolina legislature elected her to serve as an at-large circuit court judge and in late 2009, President Barack Obama nominated Judge Childs to the U.S. District Court. She was confirmed by the Senate in August 2010.

Childs is president-elect of the Federal Judges Association and a member of the American Law Institute. She sits on the Leadership Council of Duke Law School’s Bolch Judicial Institute. Last month she received the Duke Law Alumni Association’s Charles S. Murphy Award for Achievement in Civic Service honoring her commitment to the common good through service to the community.

She closed her talk by exhorting the graduates to remember they are part of the profession’s continuum, holding up judges and attorneys who display courage in the face of personal threats and Duke Law clinic professors and alumni who expand access to justice and serve as ethical prosecutors and zealous public defenders.

“These lawyers and judges represent the best of us. Commit to these principles and allow them to reach your work: be courageous, play fair, display your honest character, for your reputation is always at stake,” Childs said.

“As you enter the practice of law, don’t place a premium on competition and self-advancement, but remember the shoulders upon which you stand, and recognize that sometimes your extraordinary contribution may be how you inspire someone else. I leave you with this quote from Thurgood Marshall, who urged that ‘in recognizing the humanity of our fellow beings, we pay ourselves the highest tribute.’”

“Remember the humanity of others and ourselves”

JD class speaker Tranae Felicien asked her classmates to keep humanity first as they proceed in their careers.

“In all that we do, let us remember the humanity of others and ourselves,” she said. “Everything we do as attorneys will affect other people. So let us never let complacency, fear, the chasing of prestige, or any other paralyzing agent stop us from validating the humanity of others. Even when people disappoint us, as we all have disappointed others at times, let us give compassion, grace, and mercy. Those things are not separate from the pursuit of justice. They are intertwined.”

She also exhorted them to use their powers for the betterment of systems and institutions, also quoting Justice Marshall on the Constitution: “‘We the People’ no longer enslave, but the credit does not belong to the Framers. It belongs to those who refused to acquiesce in outdated notions of ‘liberty,’ ‘justice,’ and ‘equality,’ and who strived to better them.”

Arthur Adler, who earned his law degree from Université Paris II Panthéon-Sorbonne, delivered the LLM address. He recalled that the class was able to spend the fall semester with LLM students from the class of 2021, who started their program the previous January due to the pandemic. Those students introduced the class to Durham and became mentors and friends, Adler said, further expanding their global network.

“Never will we experience such a multicultural environment, where over 30 nationalities live together and bond,” he said. “We learned many new words in foreign languages, from Arabic slang to famous Spanish interjections. We discovered and enjoyed each other’s cooking and traditions. Most importantly, we treasured hearing new opinions and ideas during our very lively conversations. This spirit of open-mindedness and acceptance is central to our program.”

Abrams also presented the 2022 Justin Miller Awards, given to JD graduates in the categories of leadership, integrity, citizenship, and intellectual curiosity, and to one outstanding LLM student.

Abrams closed by wishing the class a fulfilling career in the law and urging them to return. “Please come back often and maintain a strong connection to your professors, your classmates, and the next generation of Duke Law students. This is just the beginning of what we hope will be a long relationship with your loving alma mater.”