The first-ever collaboration of law reviews marks the centennial of the 19th Amendment's ratification and women occupying the editor-in-chief slot at the Top 16 law schools. 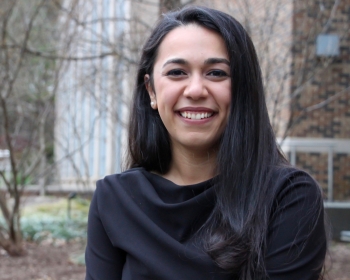 The student-led Duke Law Journal (DLJ) has joined with the flagship law reviews at the other top-ranked law schools to produce a special edition that commemorates a milestone in legal education: For the first time ever, all of their editors-in-chief are women.

“The idea was sparked in part by the 100th anniversary of the ratification of the 19th Amendment, but also by all the editors-in-chief being women this year,” said DLJ Editor-in-Chief Farrah Bara ’20, who initiated the project.

Their achievement also coincides with the 150th anniversary of the first women graduating from law school, earning admission to the bar, and securing appointment to a judicial position. The collaborative journal issue, titled Women & Law, features 14 essays, including one by Dean Kerry Abrams, and is available online. Each school took part in selecting which authors and essays to include.

“We wanted to learn what we could from some amazing women in the field. The hard part was getting it all together,” Bara said, noting her appreciation for the assistance of her fellow editors-in-chief and delight at the quality of the essays they chose.

“Dean Abrams’s piece considers how part of women’s advancement is thinking about how we conceive of families, and if we are often putting the burden on women for childcare, then women will struggle to advance,” she said. “There are a lot of amazing essays, and that one definitely stands out for me.”

Bara came up with the idea for a joint publication last January after watching women sweep the law review elections at the schools occupying the top 16 slots in the U.S. News rankings. Editor-in-chief is a coveted leadership position for law students, and while women already outnumber men enrolled at accredited law schools, they have never before held all of the top positions.

“That was really wonderful, but also unexpected,” Bara said. “As Professor (Stuart) Benjamin put it, if you flip a coin 16 times in a row, there’s a very low probability that you’re going to get heads 16 times. It’s just unlikely.”

Aware that the sweep coincided with the centennial of the 19th Amendment, which was passed by Congress on June 4, 1919, and ratified Aug. 18, 1920, Bara began thinking about how to commemorate the occasion.

“I thought it would be great if we did something that has never been done before. And the idea emerged that we would publish something collectively — a true joint effort by all the journals.”

Her idea was championed by Professor Marin K. Levy, who quickly brought on board Dean Abrams, Katharine T. Bartlett, the A. Kenneth Pye Professor Emerita of Law and former dean of the Law School, and Professors Kathryn Webb Bradley and Neil S. Siegel.

“There is such a profound value — both real and symbolic — in having the top of the masthead of the top law journals occupied by women,” said Levy.

“We are not far removed from a time when very few women attended law school and when those who did attend were not always welcome. So to have a moment, now, when women are universally holding such a crucial student leadership role is exhilarating and inspiring.”

For Bara, publication of Women & Law is both a meaningful capstone to her law school career and an apt segue into professional life. After graduation, she will work at Williams & Connolly in Washington, D.C., before returning to her native state of Texas to clerk for two distinguished female jurists: Fifth Circuit U.S. Court of Appeals Judge Catharina Haynes and Chief Judge Lee H. Rosenthal of the U.S. District Court for the Southern District of Texas.