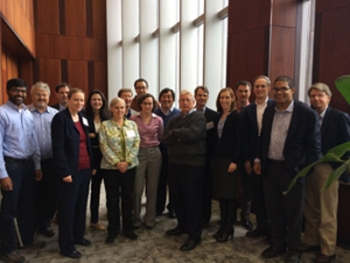 Duke Law convened a gathering of leading scholars and former government officials to discuss President Barack Obama’s war powers legacy on Oct. 3.  The roundtable, the second in an annual series of foreign relations roundtables held in conjunction with Yale University School of Law, included two scholars who have held the post of legal adviser to the State Department, two former heads of the Department of Justice’s Office of Legal Counsel, and several others who “have also had to address war powers issues from inside the government,” said the event’s organizer, Professor Curtis Bradley.

“It’s a great mix of people with scholarly expertise and practical experience in dealing with war powers issues and the legal issues they pose,” said Bradley, the William Van Alstyne Professor of Law and Professor of Public Policy Studies. Each attendee addressed an aspect of the topic in a discussion paper to spur the conversation, Bradley said.  There have been a number of controversial legal issues in the Obama administration having to do with war powers, including the use of drones for targeted killings, detainee policy and the Guantanamo detention center, and ongoing controversy over which conditions necessitate Congressional authorization for the use of military force (such as against the Islamic State).

“We reflected more generally on the direction of war authority for presidents in the United States,” Bradley said. “Are there ways to curb presidential unilateralism, which many considered a problem long before the Obama administration? Should the courts get more involved? They tend to stay out of war powers issues, but it’s worth talking about whether they should get involved to push Congress to do more, to keep the president from acting so unilaterally. Should there be a new War Powers resolution that functions better than the one we have? Should international law be doing more here to address uses of force—for example, uses of force carried out with the ostensible consent of the nation where force is used?”

The goals stated by candidate Obama on the campaign trail in 2008 and the decisions he made in office have added to the discussion about presidential war powers, Bradley said.

“Obama as a candidate suggested on the campaign trail that he intended to do things differently than the George W. Bush administration from a war powers perspective, to work more closely with Congress, to act less unilaterally than Bush had been doing, and also just reduce our involvement,” Bradley said. Among candidate Obama’s stated goals: To close the Guantanamo detention center and wind down U.S. military action in the Middle East. “For a variety of reasons, not necessarily his fault, but the Guantanamo detention center still exists, and now we have a different Middle East conflict with the Islamic State.” The Obama administration’s increase in the use of targeted killing through automated drones is another controversial aspect of warfare that will be a part of his legacy, Bradley said.

The administration’s decisions about when to seek Congressional authority for the use of military force have contributed to a longstanding debate on that point. In 2011, with the approval of the United Nations Security Council, the U.S. joined other nations in using military force to enforce a no-fly zone in Libya for humanitarian reasons. In that instance, Obama did not seek congressional approval.  In 2013, the administration opted to seek congressional authorization for the use of force in Syria, in response to reports of chemical weapons attacks by the Assad regime. But 2014 saw the administration’s decision to use force against the Islamic State in Iraq and Syria without at least initially seeking congressional authorization, instead relying first on constitutional authority and then on purported statutory authority relating to the 9/11 attacks and the war in Iraq.

Several roundtable participants have been a part of governmental decision-making with regard to these issues, including conference co-organizer Harold Hongju Koh, a law professor at Yale who served as Legal Adviser to the State Department from 2009 until 2013.

Koh, Yale’s Sterling Professor of International Law, testified before Congress about the legal rationale for some of the administration’s decisions regarding Congressional use-of-force authorization and drone policy.