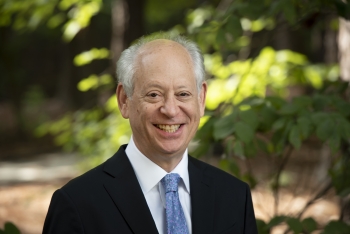 Professor of the Practice Donald Beskind

Duke Law faculty and alumni involved in challenging the reinstatement of death sentences after the retroactive repeal of North Carolina’s Racial Justice Act hailed a state Supreme Court decision that the move was unconstitutional — a ruling that is expected to spare the lives of four inmates on death row.

On Aug. 14, the court ruled 4-3 in State v. Robinson that Marcus Reymond Robinson’s constitutional rights were violated and ordered that he be removed from death row and the sentence of life without parole reinstated, ending years of litigation in the case. Robinson was the first North Carolina inmate to appeal a capital conviction under the Racial Justice Act, enacted in 2009 as recourse for defendants who could demonstrate that their cases had been tainted by racial bias. The Robinson ruling is likely to control the outcome of three similar cases pending before the court, all of which involve defendants who won relief under the Racial Justice Act before it was repealed.

Professor Donald H. Beskind LLM ’77, co-counsel for Robinson, called the opinion, written by Chief Justice Cheri Beasley MJS ’18, “the most meaningful result in any case I’ve worked on. Marcus’s life was spared but the actual result was only part of my excitement about the opinion,” Beskind said.

“In the first six pages, Chief Justice Beasley laid bare the sordid history of racial discrimination in criminal trials, particularly in jury selection. Having this on the record of the state’s highest court is a long-overdue recognition of past discrimination and, I hope, a promise of future changes.”

“I was gratified that our state’s highest court recognized the profound and significant role race has played in jury selection in death penalty cases in our state,” McKissick said. “Hopefully, this decision will send a strong and powerful message to prosecutors handling similar cases in the years to come.”

Robinson, now 47, was sentenced to death in 1994 for killing a 17-year-old boy. In 2012 he became the first person to win his appeal under the 2009 Racial Justice Act, under which defendants could present statistical data to prove that race had been a material factor in their trials. Robinson presented a Michigan State University study of North Carolina jury selection that showed Black potential jurors were struck from jury service in 1994 at more than twice the rate of whites.

Robinson’s death sentence was vacated in 2012 by Superior Court Judge Gregory Weeks in a 168-page decision and he was resentenced to life without parole. But in 2013 the state repealed the statute and applied the repeal retroactively to Robinson’s and three other successful Racial Justice Act claims, effectively sending four people who had demonstrated racial bias in their cases back to death row.

Coleman credited Weeks, now retired, for his carefully reasoned opinion and detailed finding of facts that allowed the Supreme Court on Aug. 14 to acknowledge the role of racism in the criminal justice system.

“This is an extraordinary victory for Don and his co-counsel and all of the lawyers who litigated these cases under the Racial Justice Act,” Coleman said.

North Carolina’s Racial Justice Act, which stated, “No person shall be subject to or given a sentence of death or shall be executed pursuant to any judgment that was sought or obtained on the basis of race,” was signed into law on Aug. 11, 2009. Its primary sponsor was McKissick, who represented District 20 in the North Carolina Senate from 2007 until January 2020, when he resigned to accept an appointment by Gov. Roy Cooper to the North Carolina Utilities Commission.

“The Act itself was a brilliant and early attempt by Floyd McKissick, Jr., and others to ensure the no person would die in North Carolina if race was a factor in their death sentence,” Beskind said.

While the only relief possible was modest — a life sentence without possibility of parole — and did not begin to address wrongful charges and convictions on the basis of race, it was as far as the law could go at the time, Beskind said. Yet when Robinson and three others were able to win that relief, the General Assembly first weakened the Act in 2012 by increasing defendants’ burden of proof, then repealed it altogether in 2013.

“This not only took the state back to the bad old days but in doing so demonstrated that discrimination was very much alive in that body’s majority,” Beskind said. “It is a wonderful irony that Floyd’s dream, dashed by the General Assembly’s reaction, was given its correct effect in the Marcus Robinson case.”

McKissick recalled that it took a great deal of work to get the Racial Justice Act passed, but it had backing from not only those who opposed the death penalty, but also from members who supported it but believed that capital punishment should only be imposed free of racial bias. “You will never know how I felt when the RJA was repealed by the Republican majority in the General Assembly,” he said.

In addition to the four inmates who won their appeals, more than 100 other death row inmates had appeals pending but not heard during the four years the Racial Justice Act was in place. In June, the state Supreme Court held in State v. Ramseur that the state’s repeal retroactively violates the constitutional prohibition on ex post facto laws, and those appellants are entitled to have their cases heard.

With the decision in Robinson, McKissick hopes judges will follow suit and redress past injustices.

“This recent decision by the Supreme Court offers judges in our state a unique opportunity to remedy racist practices that resulted in the imposition of the death penalty for many that are on death row today,” he said.

Beskind called the evidence of racial discrimination in jury selection in that case “stark and undeniable” and noted that even the most conservative U.S. Supreme Court justices have acknowledged that race discrimination in jury selection is a serious and long-standing problem that courts must address: In June 2019 Justice Brett Kavanaugh, writing for the 7-2 majority in Flowers v. Mississippi, found the state violated Batson v. Kentucky, a 1986 ruling making it unconstitutional to exclude a juror solely because of race, when a prosecutor struck 41 of 42 potential Black jurors in the defendant’s six murder trials.

In an historic ruling in May 2020, the North Carolina Supreme Court ordered further development of the factual record to determine whether race was the primary reason for excluding Black jurors in a 2014 Cumberland County murder trial, State v. Hobbs. The “extraordinary” decision was the first time the court had acknowledged discrimination against jurors of color and was “a good starting point in addressing North Carolina’s shameful record of denying African-Americans their civil right to serve on juries,” said Coleman, who has been involved in most of the North Carolina cases, including Hobbs and Ramseur.

“These issues will continue to come up. As they do, my hope is that the state Supreme Court will continue to take this civil rights problem seriously, by enforcing and strengthening legal protections against race discrimination,” he said.

"What’s most important is the message that courts across North Carolina must vigorously investigate the reasons why jurors of color are excluded, not simply rubber stamp the prosecutor’s strikes.”