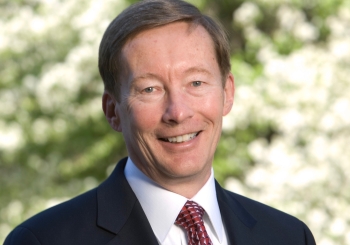 Duke Law’s 25th annual National Security Law Conference began on Feb. 28 with a keynote speech by the editor-in-chief of the Tallinn Manual on the International Law Applicable to Cyber Warfare, who described how and when offensive cyber operations violate a nation’s sovereignty. Immediately afterwards, a panel of experts from the military and academia discussed legal challenges implicated by the use of drones domestically, humanitarian operations involving military forces, the latest developments in the International Criminal Court, and the prospect of war in outer space. And that was all before lunch.

Maj. Gen. Charles Dunlap, Jr. (USAF Ret.), the executive director of the Center on Law Ethics and National Security (LENS) and a professor of the practice of law, crafted an agenda for the two-day conference that showcased the dynamism of national security law as a field shaped by an ever-evolving set of interrelated challenges and strategies. Many of them are driven by rapid-fire technological innovation, reflected in discussions of social media, surveillance, the use of technology both to enable terrorism and fight it, and how some nations have utilized it in coercive campaigns against state adversaries that fall short of acts of war. Featured speakers included Lt. Gen. Charles W. Pede, the judge advocate general of the U.S. Army, whose talk addressed the important role legal advisors have to help their clients find clarity — or at least confidence — to perform their mission, and Lt. Gen. Charles Hooper, the director of the Defense Security Cooperation Agency, who spoke about “Security Cooperation and the Rule of Law.” Also featured: Maj. Gen. Dana Pittard (USA, Ret.) and Master Sgt. Wes Bryant (USAF, Ret.), authors of a book detailing how airpower was incorporated into the ground-level operations in the U.S. fight against ISIS.

As always, registration for the conference filled quickly with attorneys from government and the private sector — including military lawyers — judges, students of law and other disciplines, and members of the public.

“I think it’s the best national security legal conference in the country,” said David Hoffman ’93, director of security policy and global privacy officer at Intel Corp., who teaches Informational Privacy and Government Surveillance Law at Duke Law and is a professor of the practice at the Sanford School of Public Policy. A former member of the U.S. Department of Homeland Security’s Data Privacy and Integrity Advisory Committee and chair of an advisory panel on civil liberties and privacy for the director of the National Security Agency (NSA), Hoffman joined a panel on social media and national security, and noted that senior executives and attorneys from Intel, a longtime sponsor, also attended. He lauded the high level of military participation in the conference and Dunlap’s “tremendous focus” on including students. “For people who are really interested in exploring the development of the underlying issues, there isn’t any better conference.”

Fulfilling its founder’s vision to inform and teach
Few were thinking about advanced technologies like cyberwarfare and the use of drones when LENS hosted its first conference in 1995. Just two years prior, Professor Robinson O. Everett LLM ’59, the former chief judge on the U.S. Court of Military Appeals (now the Court of Appeals for the Armed Forces) and a noted authority on the Uniform Code of Military Justice, had established the center at Duke to support teaching and scholarship on national security topics. Scott Silliman, professor emeritus of the practice of law and director emeritus of LENS, offered a tribute to Everett at the conference, saying that Everett’s “contagious enthusiasm” persuaded him to retire from his long career as an Air Force judge advocate in 1993 and join the Duke Law faculty. He also recalled the center’s early partnership on conferences and curricula with the Center for National Security Law at the University of Virginia, which was led by one of Everett’s former students, John Norton Moore ’62.

Silliman, now deputy chief judge of the United States Court of Military Commission Review, said that Everett aimed, from the outset, to “inform the debate” on national security issues through LENS programming and conferences, not to promote a particular point of view, and he and Dunlap tried to adhere to that vision. “This center has come a distance since 1993,” Silliman said. “All along the path of growth of this center and these conferences, Robinson Everett was steering.” Noting that Everett, who died in 2009, received many accolades and honors, Silliman said he primarily cherished his mentor’s humility: “I never met a kinder, gentler, warmer person than Robinson Everett.”

Sparking interest, advancing careers
In addition to organizing center programming at Duke Law throughout the academic year, Dunlap also enthusiastically embraces the mission of teaching and mentoring students interested in careers in national security and military law, both in the public and private sectors.

A prolific writer and commentator, Dunlap teaches and writes in areas including the law of armed conflict, the use of force under international law, civil-military relations, military justice, and ethical issues arising in the practice of national security law. Other offerings in the field include courses relating to cyberwar and cybercrime taught by LENS’ inaugural Robinson Everett Distinguished Fellow Shane Stansbury, a former federal prosecutor who successfully led major cases involving terrorism, cybercrime, and espionage, and a comprehensive range of courses on international and foreign relations law, constitutional law, the executive branch, and the federal courts.

Indeed, the Law School is one of the few institutions that can boast the curriculum and faculty expertise essential to a full understanding of national security law broadly, Dunlap said: “We have it all at Duke.” And while he speaks with pride of his many former students who have entered the JAG Corps and government service, he points out that most of his students are bound for the private sector.

“We try to orient them towards these issues so that they would be uniquely equipped, in the private sector or in clerkships, to address them as they arise,” he said, noting that many national security leaders, particularly political appointees, come from law firms and industry. “In a way we are thinking about students 10, 15 years down the road, in whom we might have lit a flame that will spark their interest. Maybe they are even just keeping up with the issues from time to time so that when the opportunity does arise, they will be disposed to serve and feel comfortable taking those opportunities.”

Having entered law school with a strong interest in a military law career, Capt. Kara Iskenderian ’18, now stationed at Lackland Air Force Base in Texas, said she could not have realized her goals without the support and guidance she found at Duke. “Gen. Dunlap, my peers, and many other professors taught me an enormous amount about law, but, more importantly shaped my broader understanding of who I am as a person and as a lawyer,” said Iskenderian, who attended the February conference.

Ben Kastan JD/LLM ’12 also found that studying national security and military law at Duke helped confirm his interest in practicing in the area and then secure a position at the NSA through its Honors Attorney Program. Kastan, now the agency’s assistant general counsel for cyber, also credits the opportunity he found at Duke to pursue an LLM in international and comparative law concurrently with his JD, study at the Law School’s summer institute in transnational law in Geneva, and conduct research on U.K. counterterrorism law at the Irish Center for Human Rights in Galway. “Having that sort of background in comparative law was incredibly helpful to working in a field that is inherently global,” he said.

Kastan took part in a panel discussion at the LENS conference on law, technology, and the future of surveillance as well as a Feb. 27 pre-conference career session for students who aspire to enter national security and military careers directly after law school. “My primary message was for them to follow their passions and interests to the greatest extent possible, but that there are a lot of ways to get to the same place,” he said, noting that many of his NSA colleagues started their careers in private practice, others in the military, and some in federal civilian service.

The panel is one of several chances for students to engage with practitioners that Dunlap builds into the event each year. And it’s not just Duke students: The LENS Scholars Program, launched in 2018, enabled 46 students from 25 law schools to attend the conference this year and develop professional contacts. Funded through targeted donations, the program covers visiting students’ registration and meals and subsidizes their travel and lodging expenses. Duke student volunteers partner with Dunlap in arranging off-hours events.

“We aim to bring together young people from different institutions, students who have similar interests and who can make connections in a way that would be impossible otherwise,” Dunlap said. “Many of them are at law schools that don’t have these opportunities. And Duke Law should be a destination law school for people interested in this area, writ large.”