The roots of Laurence Helfer's research interests, which range from the narrowing of human rights in an era of populism to the withdrawal of nations from multilateral institutions, reach back to his law practice, "from being exposed to the real-world implications of these issues." 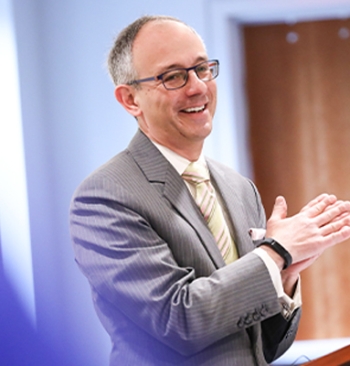 Laurence R. Helfer, the Harry R. Chadwick, Sr. Professor of Law, is an expert in the areas of international law and institutions, international adjudication and dispute settlement, human rights (including LGBT rights), and international intellectual property law and policy. With William Van Alstyne Professor of Law and Professor of Public Policy Studies Curtis Bradley, he co-directs the Center for International and Comparative Law and serves as co-editor in chief of the American Journal of International Law. Helfer is also a senior fellow with Duke’s Kenan Institute for Ethics and a permanent visiting professor at the iCourts Centre of Excellence for International Courts at the University of Copenhagen.

In the first installment of "Office Hours," which features conversations with Duke Law faculty, Senior Writer Jeannie Naujeck asks Helfer about the “real world” applications of his scholarship and how mentoring of scholars and students amplifies his impact on his field.

Your scholarship is diverse and generally divided into three strands: human rights, international intellectual property with a public interest focus, and international institutional design. What are your latest projects in these spheres?

In the area of human rights, I am working on a co-authored project on whether the European Court of Human Rights — one of the world’s most active and effective international courts — is beginning to walk back human rights. The Court has traditionally expanded rights over time in its case law. But recently it has interpreted rights more narrowly. I am evaluating the extent of this trend and whether the judges are being open about the practice. It’s an empirical project that collects all of the dissenting opinions of the European Court’s Grand Chamber to determine how frequently judges in the minority claim that the majority of the Court is cutting back on rights, implicitly or explicitly.

In the public interest/intellectual property space, I’m following up on a book that I co-authored with Professor Jerry Reichman and others on the Marrakesh Treaty to Facilitate Access to Published Works for Persons Who Are Blind, Visually Impaired or Otherwise Print Disabled.

We’ve written a short piece looking at how countries are implementing this treaty and what we can learn from that. The success of the Marrakesh Treaty shows that it’s possible to create new ways for users to share copyrighted works, at least for communities of people with disabilities, without destroying the incentives for authors to create those works in the first place.

The third strand of my research, international institutional design, concerns questions of treaty withdrawals — something the United States is doing a lot of these days — and what it means for a country to disengage from multilateral institutions. I published a chapter in Curt Bradley’s Handbook on Comparative Foreign Relations Law that considers the domestic and international issues involving treaty withdrawals, including the fallout from events such as Brexit.

Is that walking back of human rights that you mentioned related to the rise of populism and nationalism in Europe?

Yes, it is. I also have a forthcoming book chapter called “Populism and International Human Rights Institutions: A Survival Guide” relevant to those issues. Many international institutions have assumed that the world would evolve toward more extensive interstate cooperation and greater protection of individual rights. But the rise of nationalist populism – and the backlash against international institutions that has accompanied it – shows we should not take those trends for granted. The chapter proposes several survival strategies for international human rights courts and review bodies, including playing a long game; publicity and outreach; and creating windows of opportunity for supporters to mobilize.

How did you develop your diverse areas of scholarship?

They evolved from my studies in graduate school and law school, and also my law practice, which included an unusual mix of international law, intellectual property law, and civil liberties. My academic interests came from being exposed to the real-world implications of these issues.

One of the most interesting and challenging aspects of researching and teaching law is how rapidly it evolves. If you are a historian, you might be lucky and find new archival materials or develop a new perspective on an old issue. In contrast, the law is always changing. For example, when I published my first paper theorizing treaty withdrawals, other scholars thought that the topic wasn’t interesting or important. Recent events have revealed that’s not the case.

What role has mentorship played in your career?

Many people have helped me throughout my career, and one of the things that I have learned from them is how important it is to help the next generation. I’m on a first-name basis with Duke Law students once they graduate. I follow their careers and I write recommendations for jobs, for clerkships, and fellowships. For example, a former student who is teaching a course for the first time recently emailed me for some advice about how to structure her course. We also invite former students back to Duke for the international law practice series or to teach a course during Wintersession course.

Mentoring is also part of my role as the co-Editor-in-Chief (with Professor Bradley) of the American Journal of International Law. We receive hundreds of manuscripts a year, some from junior scholars and from academics outside the U.S. One way we help to shape the field of international law is not just through our own scholarship but through deciding which papers to publish and by promoting the work of young scholars and other other new voices.

What is the last great book you read?

A fascinating book by Russell Shorto called The Island at the Center of the World. It’s about the 17th-century period when the Dutch controlled the New York Colony and it’s a wonderfully-told story, from the very earliest exploration by Henry Hudson to how the Dutch came very close to establishing a republic but ultimately weren’t able to hold onto the colony.

The conventional wisdom was that there wasn’t much to learn from the Dutch period, that things didn’t really get started until the English took over. But there are archives from the 17th century in New York and in The Netherlands and scholars have started to dig into them and have learned so much more about the origins and impact of the colony.