Farahany's explorations in bioethics are not limited to the theoretical. This fall, she's participating in a COVID-19 vaccine study that uses a novel methodology to stimulate an immune response. 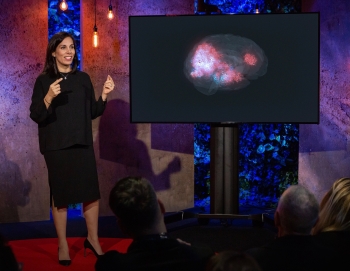 Professor Nita Farahany shows a representation of her own brain activity during a TED Talk/Photo: Ryan Lash

Nita Farahany JD/MA ’04, PhD ’06, the Robinson O. Everett Professor of Law and professor of philosophy, is a leading scholar on the ethical, legal, and social implications of emerging technologies, including artificial intelligence (AI). The founding director of Duke Science & Society, Farahany is also the chair of the Duke MA in Bioethics & Science Policy and director of the Science, Law & Policy Lab (SLAPLAB). Her November 2018 TED talk, in which she argues for an individual right of cognitive liberty that protects freedom of thought, access, and control over our own brains and our mental privacy, has been viewed 1.9 million times, and that concept is also the focus of her forthcoming book. In addition, Farahany’s work on criminal justice issues has helped lead to the exoneration and release of wrongfully-convicted persons.

In September Farahany became a research participant in Moderna’s vaccine study, which uses messenger ribonucleic acid (mRNA) to direct the body’s production of proteins to stimulate an immune response to COVID-19. Such studies raise their own ethical questions, she says.

In the second installment of “Office Hours,” which features conversations with Duke Law faculty, Farahany spoke about her forthcoming book, the applications of bioethics to current events, including the pandemic and systemic racial bias, and some of her work with the criminal justice system.

What new scholarship are you working on?

I have a lot of little pieces I’m writing here and there, particularly invited pieces on law and neuroscience and the future of law and neuroscience and the concepts of mental freedom and how that intersects with the law, as well as pieces that will come out of the Bass Connections projects I’m working on (a study of consumer EEG devices and a survey of biometrics data and immigration policy) but the biggest thing I’m focusing on now is my book on cognitive liberty. Right now I’m playing with the title “Don’t Mind Me” but we’ll see what the ultimate title is. I have a contract with St. Martin’s Press and that is where I’m spending 98% of my scholarly attention right now.

What bioethical issues have emerged during the pandemic, both generally and as they apply to vulnerable populations?

Every possible ethical issue that exists is raised by the current pandemic: How do you distribute ventilators fairly and adequately? When a vaccine does become available, how do you decide who gets it first and prioritize those individuals? With new, previously untested methodologies like Moderna’s messenger RNA vaccine study or the possibility of human challenge trials that would intentionally expose research participants to coronavirus after they have been given a vaccine, how do we ethically proceed?

At Duke Science & Society, we pretty quickly stood up a series that we called “Coronavirus Conversations” to address many different issues at the intersection of science, ethics, law, and policy – everything from how we safely hold elections to how are we going to respond to the hurricane season that’s upon us, to how to think about the new wearable devices and tracking devices to try to see who has symptoms and who doesn’t, and thinking about that in light of the kinds of changes to liberty that were implemented after 9/11 and the impossibility of rolling those back once they’re out there.

And we are standing up a series on looking at the disproportionate effect that coronavirus has had on people of color, particularly the Black and Latinx communities because of myriad factors, such as the fact that many jobs don’t give people the privilege of being able to stay home to work, or the exacerbation of existing inequities in the distribution of health care resources and health care education and access to even things like masks and gloves and hand sanitizers. We are looking at all of those things and developing a number of policy briefs and recommendations in support of that.

How will the national conversation around systemic racism shape your work?

It definitely will shape the work of Duke Science & Society. It already has. If you look at the field of bioethics there is a deep history of racism that has shaped much of existing ethical guidelines and understanding. Many of the protections and principles we have in bioethics have arisen after injustices have come to light throughout time, whether it’s the story of Henrietta Lacks, of intentionally subjecting that person to unnecessary Pap smears in order to have access to novel cell lines, or the U.S. participation in intentionally infecting prisoners in Guatemala with syphilis.

There are many, many examples over time, and those are incorporated explicitly into a lot of our courses. We are redoubling our efforts to make sure that we tell those narratives and those stories and educate our students about historical practices and current practices and disparities, and what some of the approaches and solutions might be.

What are some applications of bias you’ve found in the criminal justice system?

I worked with Jim Coleman on a Fourth Circuit case in the Wrongful Convictions Clinic where part of the reason for the poor quality of eyewitness identification is the fact that there is an inherent bias, both explicit and implicit, within the criminal justice system, but also there’s a lot of research that says that when people are making cross-racial identifications, they do so quite poorly. And if that’s true, if a person who is white is less able to distinguish between people who are Black, misidentification occurs quite often, and that ends up having significant racial implication, given the already existing biases in policing.

Brandon Garrett and I teach the Amicus Lab, which we’re going to offer again in the spring, and those kinds of issues come up in a number of amicus briefs that we write. We are really focused on science and trying to educate the courts on science, but a lot of that science includes issues like implicit bias and its impact on the criminal justice system and its impact on the application and implementation of science.

Has there been an acknowledgement that bias exists in predictive algorithms used to determine such things as the likelihood of reoffending and who is granted bail?

There’s a recognition that there is significant potential bias within data sets and if you have biased data sets then you’re going to have biased answers out of those data sets. To hope that an algorithm would solve the bias in the criminal justice system, I think, is a misplaced hope. You were starting already with a set of biased assumptions.

I think there is a recognition that maybe algorithms have their place, but that place needs to be with much better data sets that really identify and address the bias that exists within them. A big issue is explainable AI rather than “black box” AI. The more transparency there is of what goes in and how the decisions are made and what the AI is actually doing can help us audit the AI in much better ways. I think that’s an important and necessary thing to do if we are going to be applying AI in high-stakes decision-making. We need to know and be able to explain what the basis of that decision-making is – not just so we get it right, but because the public, which is subject to decisions made on the basis of AI, has a right to know.

Aside from scholarly work, have any shows or books caught your interest lately?

I don’t get the chance to watch TV very often, other than cartoons with my children, but my students have recommended two series which I have had the chance to watch and have loved! One is Black Mirror and the other is Altered Carbon. And right now I’m reading what might be boring to many people but to me is really quite interesting, which is Eric Topol’s book   The Patient Will See You Now. It’s about the flipping of the health care system, focusing on consumer-driven health care rather than physician-driven health care.

What is your perspective on the times we’re in as a law school and as a society?

We live in interesting times right now. Every now and then, when I can step back and look at where we are as an interested observer, I am overwhelmed by the realization that we are in the midst of a major moment in history. I try to stop and take pictures of the signs of the times. But it sure would be nice to get to a place that is a new normal sooner rather than later.