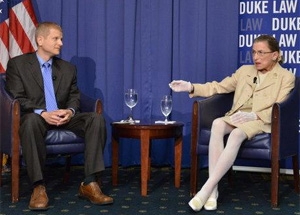 More than 60 individuals enrolled in the short evening courses taught by Duke Law faculty on constitutional and regulatory law, the legislative process, and the legal framework in which public policy is formulated and implemented in such specific areas as national security, financial regulation, environmental, and health care.

“There was a high level of energy and enthusiasm among faculty and students alike through both sessions,” said Institute Director Neil Siegel, the David W. Ichel Professor of Law and Political Science.  Siegel taught a course on constitutional structure during the first two-week session and on constitutional equality during the second, using the Patient Protection and Affordable Care Act and the Supreme Court’s recent rulings relating to same-sex marriage as frameworks for analysis.

Many of the students were congressional staffers and summer interns seeking a deeper understanding of specific matters of law and policy as well as a taste of law school.

“This experience has tremendously enhanced my Washington, D.C., summer internship experience.  Please continue to build this program,” one student wrote in a course evaluation.  “This has been an incredible opportunity.  Opening up the Law School to prospective law students is a wonderful idea that benefits many groups:  the Law School; prospective law students, and community members interested in the subject.  I hope your D.C.-Duke connections and reputation will continue to grow.”

Institute faculty infused their classes with insights from both their scholarship and practical engagement with the law and policymaking process.  In addition to Siegel, the co-director of the Program in Public Law, who published highly influential scholarship relating to the constitutionality of health care reform, faculty included Lawrence Baxter, the William B. McGuire Professor of the Practice of Law, who has divided his career between academic pursuits and leadership positions in finance; and Professor Charles Dunlap, the former deputy judge advocate of the Air Force.

A course titled “The Federal Policymaking Process: An Inside Look” was taught by a trio with an exceptional depth of inside experience:  Christopher Schroeder, the Charles S. Murphy Professor of Law and Professor of Public Policy Studies whose most recent government service includes heading the Office of Legal Policy at the Department of Justice; former Sen. Ted Kaufman, who served as chief of staff to Sen. Joseph Biden for almost two decades; and Senior Lecturing Fellow Jeffrey Peck, who heads the financial services and capital markets practice at Peck, Madigan, Jones & Stewart, Inc., in Washington and is a former general counsel and majority staff director to the Senate Judiciary Committee.  The three also regularly teach in the Duke in D.C. integrated externship program, which combines coursework with fulltime work placements in congressional, policymaking, or advocacy organizations.

“We have an amazing public law faculty, and this institute is an outgrowth of their work both teaching about policymaking, and engaging at the highest levels of policy debates,” said Dean David F. Levi in announcing the establishment of the summer institute in February.  “Our continued presence in Washington is an important part of Duke Law School.”