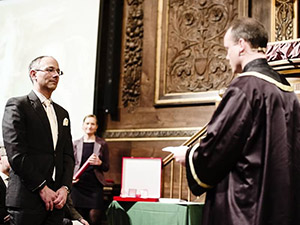 Laurence R. Helfer, the Harry R. Chadwick, Sr. Professor of Law, received an honorary doctorate from the University of Copenhagen on Nov. 21. In connection with the honor, Helfer has been made a permanent visiting professor at iCourts, the Danish National Research Foundation’s Center of Excellence for International Courts, and delivered a public lecture at the Faculty of Law entitled “Progress and Contestation in Combatting Discrimination: A Global Perspective on LGBT Rights.”

Helfer was nominated for the honorary doctorate, the University of Copenhagen’s highest academic honor, by iCourts director, Professor Mikael Rask Madsen. Madsen called his collaborations with Helfer, a leading expert in the fields of human rights and international law, “inspiring.”

“Professor Helfer is not only a brilliant researcher and teacher but also an extremely dynamic person who engages himself in innovative projects that inspire the researchers and students around him,” Madsen said in a statement.

In his public lecture, Helfer examined the rapid expansion of protections for lesbian, gay, bisexual, and transgendered individuals in domestic and international law, as well as a contrasting backlash against LGBT rights in some countries, most notably in sub-Saharan Africa and Eastern Europe. The lecture drew on Helfer’s advocacy work on international LGBT rights, which includes participating on the first expert panel at the U.N. Human Rights Council on violence and discrimination on the basis of sexual orientation and gender identity, and serving as the inaugural Jacob L. Martin Fellow to the Office of the Legal Adviser of the U.S. Department of State to advise government officials and policymakers on strategies for promoting LGBT rights globally. 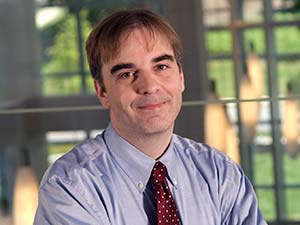 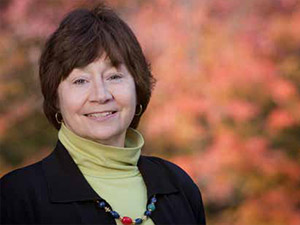 Sara Sun Beale, the Charles L. B. Lowndes Professor of Law, contributed to the American Bar Association Criminal Justice Section’s task force report on the reform of federal sentencing for economic crimes that was released in November. The report included proposed draft federal sentencing guidelines to effectuate the recommended reforms. Beale was appointed to the task force of judges, academics, practitioners, and organization representatives on its formation in April 2013. 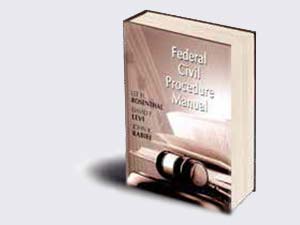 Dean David F. Levi and John K. Rabiej, director of the Center for Judicial Studies, have joined with Judge Lee H. Rosenthal of the U.S. District Court for the Southern District of Texas to co-author the new Federal Civil Procedure Manual. The manual, published by Juris Publications, is a comprehensive treatment of procedural law in federal courts that attorneys can rely on for quick answers to discrete issues. 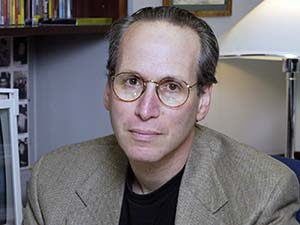 Steven L. Schwarcz, the Stanley A. Star Professor of Law and Business, has joined the Centre for International Governance Innovation (CIGI ) as a senior fellow with the independent think tank’s International Law Research Program. Schwarcz is the lead author of CIGI ’s “Paper No. 51,” a response to the Financial Stability Board’s (FSB) policy recommendations about the global financial system and threats posed by troubled and systemically important financial firms. The paper argues that a statutory approach is more effective than a contractual approach to achieve financial stability in a crisis by ensuring efficient resolution of financial firms. It also recommends that the FSB form a working group to “establish a regime of uniform statutes that provide for enforcement provisions in financial contracts.” 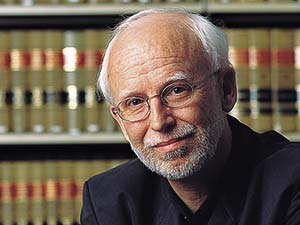 Richard A. Danner, the Archibald C. and Frances Fulk Rufty Research Professor of Law and Senior Associate Dean for Information Services, was named the 2014 Distinguished Lectureship Award winner by the American Association of Law Libraries (AALL). He presented his lecture, “What We Know and How We Think About It,” at the organization’s annual conference, held last July in San Antonio, Texas. He is also one of the AALL’s Hall of Fame Award recipients, an honor that recognizes his significant and substantial long-standing contributions to law librarianship. 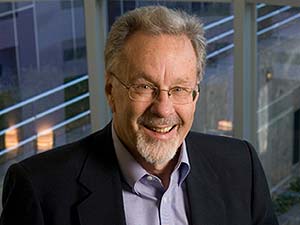 Neil Vidmar, the Russell M. Robinson II Professor of Law and Professor of Psychology, received the Litigation Counsel of America’s 2014 Justice Janie L. Shores Trailblazer Award. Presented during the LCA’s 2014 Fall Conference and Celebration of Fellows in October, Vidmar was honored for his work in the areas of medical malpractice, punitive damages, and caps on pain and suffering. Emphasis for selection for the award is placed on efforts and acts within the legal profession that are cutting-edge in the advancement of justice. 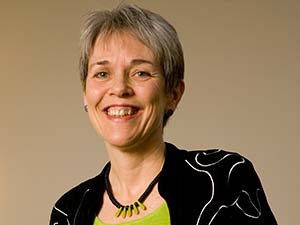 Carolyn McAllaster, clinical professor of law and director of the Health Justice Clinic (formerly known as the AIDS/ HIV and Cancer Legal Project) and the HIV Policy Clinic was lauded in an August National Law Journal feature as one of eight individuals who have worked to improve the status of women in the legal profession in the Carolinas. Praised as a role model and pioneer, McAllaster, who co-founded the North Carolina Association of Women Attorneys and served as its first president, said that women with families still face hurdles to advancement. “Because many legal workplace settings are not set up in a way that allows women who are mothers to advance easily, women often feel the need to choose,” she said. 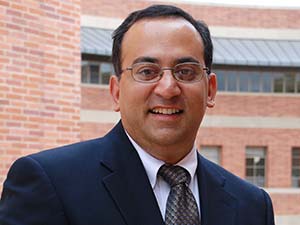 John de Figueiredo, the Edward and Ellen Marie Schwarzman Professor of Law and Professor of Strategy and Economics, along with colleagues in Duke University’s Departments of Statistical Science and Computer Science, have been awarded a grant of almost $1.5 million from the National Science Foundation for their research project, “An Integrated System for Public/Private Access to Large-scale, Confidential Social Science Data.” They propose a three-part system of data delivery for research studies dependent on the collection of large amounts of sensitive information in order to protect the identity of participants and to offer accessible and reliable mock data. 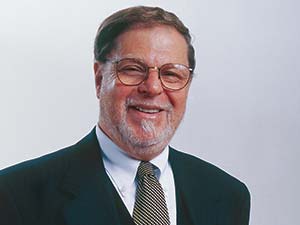 Jerome H. Reichman, the Bunyan S. Womble Professor of Law, is an editor and contributor to Intellectual Property Rights: Legal and Economic Challenges for Development, published by Oxford University Press. Reichman is the author or coauthor of several articles in the volume, which is part of “The Initiative for Policy Dialogue Series.” These include: “Intellectual Property in the Twenty-First Century: Will the Developing Countries Lead or Follow?;” “Is Bayh-Dole Good for Developing Countries? Lessons from the U.S. Experience;” “Intellectual Property and Alternatives: Strategies for Green Innovation;” and the concluding chapter on the role of intellectual property rights in developing countries. Reichman’s co-authors include several Duke University scholars from the Nicholas School of the Environment and the Sanford School of Public Policy, as well as Arti K. Rai, the Elvin R. Latty Professor of Law, and Jonathan B. Wiener, the William R. and Thomas L. Perkins Professor of Law and Professor of Environmental Policy and Professor of Public Policy. 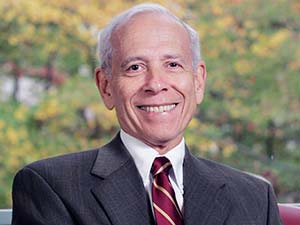 Donald L. Horowitz, the James B. Duke Professor of Law and Political Science Emeritus, delivered the annual Herbert L. Bernstein Memorial Lecture in Comparative Law on Nov. 3. In his lecture, titled “Federalism for Severely Divided Societies: Possibilities and Pathologies,” Horowitz discussed the ways “scaling down” federalism can be and has been used to separate formerly united areas so they can stay together despite their differences, which usually take the form of ethnic conflicts. Watch his lecture, co-sponsored by Duke’s Center for International & Comparative Law. 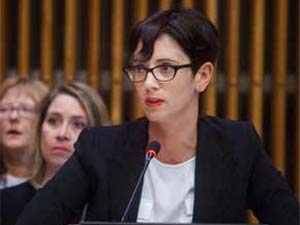 Jayne Huckerby, director of the International Human Rights Clinic, organized and moderated a panel discussion titled “Women and Violent Extremism: Participation and Prevention” at the White House Summit on Countering Violent Extremism on Feb. 18. Huckerby, a clinical associate professor of law, advises regional and international institutions on gender, human rights, and countering violent extremism, and co-edited Gender, National Security and Counter- Terrorism: Human Rights Perspectives (Routledge, 2012). She was invited to organize the White House panel after The New York Times published her op-ed on the need to look past stereotypes to better understand the role of women in terrorism and counterterrorism. 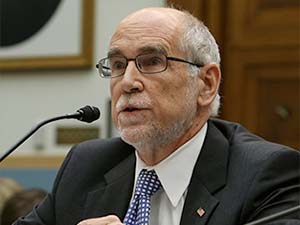 Christopher Schroeder, the Charles S. Murphy Professor of Law and Public Policy Studies, testified before the Senate Judiciary Committee on Dec. 10 regarding executive branch action on immigration. Schroeder, a veteran executive branch lawyer, addressed the legality of the policies announced Nov. 20 by Secretary of the Department of Homeland Security (DHS) Jeh Johnson that provide the possibility of deferred action and work authorization for undocumented aliens who meet specific criteria. Calling the policies “wholly constitutional,” Schroeder also told the committee that nothing in the so-called deferred-action policies “runs around or tries to avoid” Congress’s constitutional right to revise immigration laws or DHS actions. 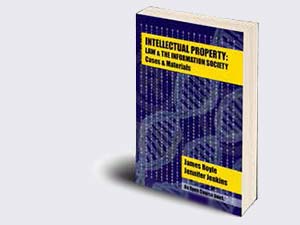 James Boyle, the William Neal Reynolds Professor of Law, and Jennifer Jenkins ’97, executive director of the Center for the Study of the Public Domain, have published Intellectual Property: Law & the Information Society — Cases and Materials, a casebook that is available for free download under a Creative Commons license. It is the first of a series of Duke Open Coursebooks. They also have published a 2014 statutory supplement that can be downloaded. “Why do we do this? Partly, we do it because we think the price of legal casebooks and materials is obscene,” they wrote in a statement. “… [W]e think that the cost is disproportionate and that the benefit flows disproportionately to conventional legal publishers. Some of those costs might have been more justifiable when we did not have mechanisms for free worldwide and almost costless distribution. Some might have been justifiable when we did not have fast, cheap, and accurate print on demand services. Now we have both. Legal education is already expensive; we want to play a small part in diminishing the costs of the materials involved.”