Shelby Baird, who graduated with a master’s degree in Bioethics and Science Policy along with her JD, is the fifth Duke Law graduate to clerk for Justice Alito and the eleventh selected for a Supreme Court clerkship since 2010. 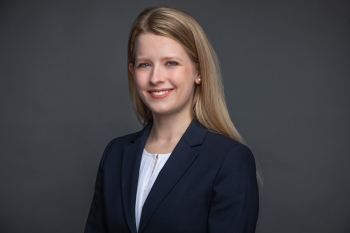 Supreme Court Associate Justice Samuel A. Alito, Jr., has selected Shelby Baird JD/MA ’18 as a clerk for the Court’s upcoming term. Baird will begin her clerkship this summer.

“I am really honored to have the opportunity to clerk for Justice Alito,” Baird said. “I was always interested in the Supreme Court growing up, and I am thrilled about getting to have this amazing experience.”

Baird met Justice Alito while taking his Duke Law seminar, Current Issues in Constitutional Interpretation, which he has taught since 2009. “I had always admired him before going to law school, but when I took his class I realized that I see the law in a similar way and that inspired me to apply for a clerkship with him,” she said.

Baird credited her faculty mentors and James B. Duke and Benjamin N. Duke Dean Kerry Abrams with supporting her application for the Supreme Court clerkship, as well as David F. Levi, the Levi Family Professor of Law and Judicial Studies and director of the Bolch Judicial Institute, who was dean during her three years at Duke Law.

“I can’t thank them enough,” she said. “I am so grateful, from the bottom of my heart, and so appreciative that they would help me and encourage me because I certainly could not have done this without them.”

Baird is the fifth Duke Law graduate to clerk for Justice Alito and the eleventh selected for a Supreme Court clerkship since 2010. Most recently, Hunter Bruton ’16 served as Justice Alito’s clerk during the Court’s 2019-2020 term.

“Shelby’s talent and drive were evident to all who watched her excel at Duke Law,” Abrams said. “We are thrilled she is now adding a Supreme Court clerkship to her already lengthy list of achievements, and are proud to have provided the foundation for her legal career.”

“I am absolutely delighted that Justice Alito selected Shelby as one of his law clerks,” said Robinson O. Everett Professor of Law Nita Farahany. “She brings a unique combination of a brilliant legal mind, compassion for others, openness to other viewpoints, poise, maturity, and life experience, that will make her an outstanding Supreme Court clerk. She was an exceptional student in every way — in law and in bioethics, in her coursework, in her scholarship, in her community engagement, and in her leadership.”

Taking each opportunity as it comes

Baird said her clerkship with Judge Hardiman was a key factor in her readiness to apply for the Supreme Court clerkship.

“For someone coming right out of law school, a court of appeals clerkship is a dream job — witnessing all the advocates that come before the court, seeing what good writing looks like, and working really in depth on cases,” she said. “Judge Hardiman is not only a very thoughtful judge, but also an incredible mentor, and he was a big advocate for me when I was applying for the clerkship with Justice Alito. Judge Hardiman works incredibly hard and takes the judicial oath very seriously. I learned so much from him.”

Baird is currently an associate with Cooper & Kirk, a boutique appellate litigation firm where she previously spent a year as a William H. Rehnquist Fellow after graduating from Yale with a bachelor’s degree in political science. She is working remotely from Pittsburgh, an hour from her hometown of Somerset, PA.

“Right now I am working on becoming the best litigator I can be and taking every opportunity as it comes,” Baird said. “If you would have asked me a couple of years ago if I would be clerking on the Supreme Court, I would have just laughed. It is one of those things you never think will happen to you.”

Professor Thomas B. Metzloff said that Baird stood out early as one of the most active participants in his 1L Civil Procedure class and a frequent visitor at office hours, where she displayed a keen interest in the litigation process. Baird later served as Metzloff’s teaching assistant for Civil Procedure and also for Distinctive Aspects of U.S. Law, a class taught to international LLM students.

“Shelby was among the best teaching assistants I have had for this course – and I’ve had many, including two who clerked for the Supreme Court,” Metzloff said. “Not only did she have mastery over the material, but she was strikingly effective in presenting it to the students to enhance their understanding and appreciation of the nuances of U.S. law.”

Added another faculty recommender, William Van Alstyne Professor of Law Curtis Bradley: “In addition to being extremely smart, Shelby has excellent practical judgment and an incredibly strong work ethic. She was a student in my Federal Courts class — a class always filled with some of the top students — and she received the highest grade. She was also terrific in class discussions, and I especially appreciated her enthusiasm when tackling difficult questions of legal doctrine.”

In addition to excelling academically at Duke Law, Baird served as notes editor for the Duke Law Journal and distinguished herself as a leader, winning the Duke Bar Association’s Outstanding Student Organization Leader Award for her work as president of the Federalist Society. “She led the Duke Law chapter with considerable grace and fortitude,” said Alston & Bird Professor of Law Ernest Young.

Baird also served as a student leader for the Cancer Pro Bono Clinic and earned a Client Service Award for her work in the Health Justice Clinic. Her experience with thyroid cancer during college sparked an interest in health law and bioethics, which she pursued, with Farahany’s mentorship, as a joint-degree student in the demanding Master of Arts in Bioethics and Science Policy program.

“Shelby brought her own personal experience in navigating the healthcare system, compassion, and sharp legal mind to bear on questions at the intersection of law, science, medicine, and ethics,” said Farahany, who is faculty chair of the MA program. “It was her outstanding commitment to and mastery of both her law school and master’s coursework that led to her being selected for the Interdisciplinary Studies Faculty Award at graduation, which I had the honor of presenting to her.”

Baird was the only 1L in Farahany’s FDA Law & Policy class, which helped inspire her student note, “Don’t Try This at Home: The FDA’s Restrictive Regulation of Home-testing Devices,” published in Duke Law Journal in 2017. In it, Baird argues that courts should not defer to the Food and Drug Administration’s interpretation of “safety” in restricting home-testing devices and direct-to-consumer genetic testing services such as 23andMe because the agency’s expansive view of safety improperly seeks to protect consumers from their own negative reactions to test results.

Furthermore, she argues, the agency should not have the power to make value judgments about whether consumers should seek their own personal medical information. In taking such a role, she writes, the agency oversteps its authority, restricts individual autonomy, and presents worrisome implications for restrictions on current and future technologies.

Farahany, who served as Baird’s note advisor, called the piece “a brilliant piece of scholarship that reveals her insightful and thoughtful approach to novel questions of law, ethics, and policy.”

Levi recalled meeting Baird during Admitted Students Weekend in 2015 and said her Supreme Court clerkship confirms the strong impression she made.

“I could tell right away that this was someone we really wanted at the Law School,” he said. “She went on to become a superb student and contributing member of our close-knit community. She now has earned this wonderful opportunity with Justice Alito, and I know that she will be a terrific law clerk. We can all be proud of Shelby for her many accomplishments and for the person that she is.”